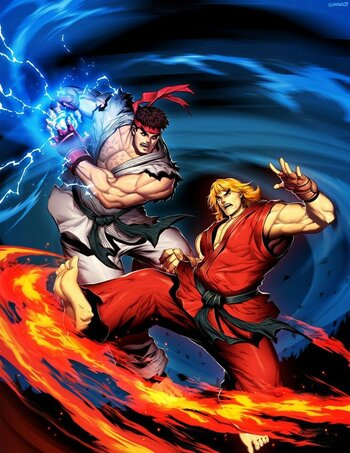 "Just how many of you Hadoken-throwers are there, anyway?"
— Fei Long, about Gouken, Super Street Fighter IV
Advertisement:

Perhaps the most basic form of Fighting Game character. Usually Jack of All Stats, this fighter's two most notable Special Attacks are a fireball or other projectile attack, and a rising physical attack, usually an uppercut (the standard versions of these are the Hadouken and Shoryuken). Their third attack is either a Spin Attack or an attack that rushes forward, or both (the standard version being Hurricane Kick which can do both). Wearing a gi or headband is optional. As you may have guessed, this character is essentially "inspired by" Ryu, the protagonist of the Street Fighter series.

Note that having a projectile and something vaguely resembling an uppercut will get this label slapped on a character regardless of which moves are actually their most notable (a "true" Shotoclone also uses the same Quarter-Circle Forward and Dragon Punch (Forward+Down+Down-Forward) joystick motions respectively).

The term Shotoclone (or "shoto") comes from the English localization of Street Fighter II for the Super NES, which misidentified the fighting style used by Ryu and Ken as Shotokan Karate in the instruction manual. The martial art of Ryu and Ken has never been given a proper name in the Japanese versions (or in the games themselves), although the back-story in later games reveals that Gouken (Ryu and Ken's master) developed the fighting style from the original assassination art called Ansatsuken (literaly, "assassination fist"note Hence the name of the webseries, Street Fighter: Assassin's Fist) he learned with his brother Akuma from their master Goutetsu. For the record, Ryu and Ken's original moveset is largely based on Shotokan karate (no, not the special moves!), while in later games Ken's technique - notably his kicks - moved towards Kyokushin, in a textbook example of Divergent Character Evolution.

The equivalent term of "Shotoclone" used by Japanese fandom is "Ryu/Ken-type"note リュウケンタイプ, All About Capcom Head-to-Head Fighting Game 1987-2000, page 285 (or "Ryu-type" for simplification purposes).

Also subjective to Spell My Name with an S, since the romaji of "shoto" can also be typed/written as "shōtō" or "shoutou" (hence, "shōtōclone" or "shoutouclone") due to being modeled after the karate term that's also subjected to thisnote Shotokan/Shōtōkan/Shoutoukan; lit. Pine Wave Halls, but this largely depends on the writer.

No relation to Send in the Clones. Do not confuse with shotacon, and God help you if you do. Subtrope of Fountain of Expies and Moveset Clone.