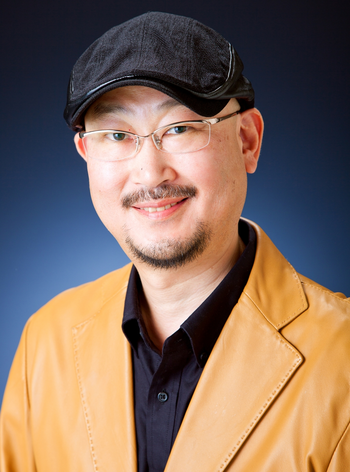 In the same field as the late Kazunari Tanaka, Ugaki is a veteran Bit Player in the voice acting industry; spreading wide from Japanese animation, to western animation dubs, to foreign film dubbing, Ugaki roams from scene to scene firmly clasping his spear and supporting a vast variety of more colorful high-profile cast members. He has, however, also landed some larger roles, perhaps most notably the mercurial, larger-than-life, one-eyed gangster Goro Majima in the Yakuza series of video games.

While Tanaka's forte were mainly the ordinary dudes, Ugaki lands more of the big guys, antagonizers, villains, and mooks.

Among his ocean of projects, his breakthrough was for his performance in YuYu Hakusho. And has since taken on Long-Runners to this date within Anpanman, Case Closed, and Nintama Rantarou.

However, Ugaki does have one-hit wonders, check the list below to see who they are.

When you look at it from a perspective, we may have been living in a world that applies the "Hidenari Ugaki Everywhere" system...

Okay, maybe it's time to go to another page through the index—wait, why did that '|' between Previous and Index look weird...?
(pops up between 'Previous' and 'Index') "Hellooo, Troper-chan!!"
GAH! He's in the index! Hidenari Ugaki is everywhere, de gowasu~!