Literature / Run with the Wind 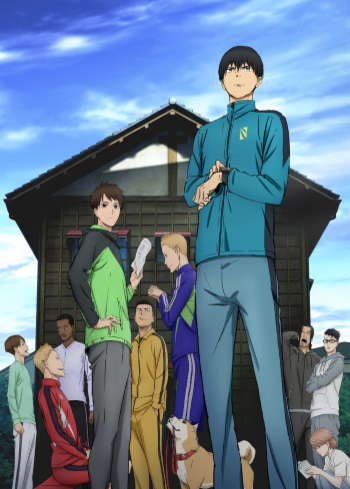 Having lost a lot of money during a mahjong game, a young runner by the name Kakeru Kurahara ends up surviving either by hook or by crook. While shoplifting at night, his running piques the interest of Haiji Kiyose who happens to be passing by. Haiji then invites Kakeru to the Kansei University Dorm. Little does Kakeru (or any of the other residents of the dorm) realize that the place is actually the Kansei University Track and Field dorm; Haiji himself seeks to gather a 10 man team of runners, and Kakeru is just what he's been looking for. His dream? To run in Hakone Ekiden

, a prominent relay marathon race. Too bad majority of the team aren't actually all that athletic, so a lot needs to be done for them to stand a chance...

Run with the Wind (風が強く吹いている Kaze ga Tsuyoku Fuiteirunote "The Wind Blows Strong") is a Japanese novel written by Shion Miura (the same person behind the novel and anime Fune Wo Amu) and published in 2006. (Not categorized as a Light Novel, as this book is over 600 pages long and uses more complicated text, far larger than light novel standards.)

A manga adaptation was serialized from 2007 to 2009 (starting out in Weekly Young Jump, then moving to Monthly Young Jump in 2008), and a stage play and movie adaptation were both made in 2009 (the latter with the English title Feel the Wind). An anime adaptation by Production I.G premiered on October 3rd 2018 with 23 episodes, and can be viewed

Not to be confused with the Run Wild novel with the same name, nor the other novel and movie Gone with the Wind.