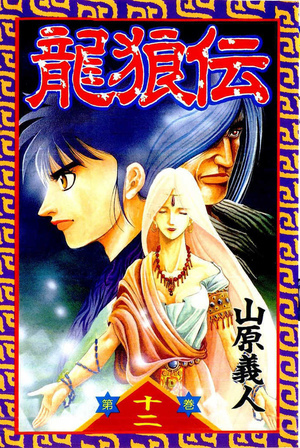 A long-running Shounen manga, Ryuroden, also known as Ryuuroden still lacks an animated adaptation, but still has a strong cult following for its impressively drawn art, interesting story, and intense action scenes, all while avoiding the usual overly-long Story Arcs.

Shiro and Masumi are childhood friends who attend the same school. Shiro's mother was of Chinese descent and her lessons in the Chinese language inspired an interest in Chinese culture and history for Shiro. The two children are on their annual Class Trip one day and all seems well... When a dragon appears out of nowhere and snatches Shiro out of the plane that they were flying on. Masumi, having held onto Shiro for dear life, is also pulled along by the dragon, and the two seemingly vanish without a trace. The dragon promptly drops them into the middle of a massive battlefield. Shiro, with his knowledge of Chinese history, quickly realizes that they are no longer in modern-day Japan, but ancient China. Specifically, the era when Romance of the Three Kingdoms takes place.

Shiro's life is saved by the famous military strategist Dan Fu/Xu Shunote It was noted that Xu Shu's original name was 'Shan Fu', quite similar with Dan Fu., but is mortally wounded in the process. Dan Fu, believing that the dragon brought Shiro into their world for a reason, appoints Shiro as his replacement strategist with his dying breath. Shiro, wishing to maintain the proper course of history and to honor the wish of the man who saved him, uses his knowledge of history to defeat an army of 50,000 men with only 5,000 followersnote Again, in conjunction with the above, that was Xu Shu's accomplishment that eventually had Cao Cao spread the false letter about Xu Shu's mother in his custody, a quick way to eliminate the threat of Liu Bei.. Word quickly spreads of the miraculous Dragon Child's strategic genius and Shiro and Masumi are quickly treated with the same regard as some of the highest ranking nobility. However, the opposing army's leader is also very interested in Shiro's power and wishes to capture him so that he can use his power.

Thus begins Ryuroden, a shounen manga notable for its little fanservice, refined art-style, clear displays of the author's knowledge of the Three Kingdoms era, and unique use of many Shounen anime tropes.