Film / Record of a Tenement Gentleman 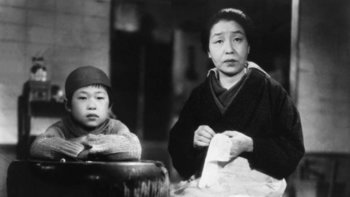 Record of a Tenement Gentleman (長屋紳士録, Nagaya shinshiroku) is a 1947 film directed by Yasujiro Ozu. It was the first film he made after World War II.

Tokyo, right after the war. A young man brings Kohei, a boy of maybe 8 years old, to the young man's home. Kohei was wandering around lost, having gotten separated from his father in the suburb of Chigasaki. The young man's father Tone categorically refuses to host a child, and the boy is eventually foisted onto his neighbor Tane, a widow.

Tane is not at all happy about this. First she tries to shoo Kohei out of her little house. Later, after they go to Chigasaki but fail to find Kohei's father, Tane tries to abandon the boy at the beach. But Kohei sticks by Tane, and eventually they bond.