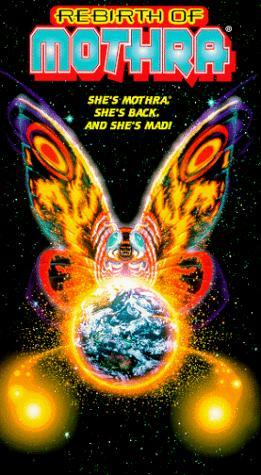 Mothra returned from the Toho break with Godzilla and Mothra: The Battle for Earth. The film made a lot of money and there was a lot of new demands for Mothra. In 1996 a new trilogy started staring Mothra and titled 'Rebirth of Mothra.' The trilogy has no connection to the Heisei Godzilla series and implimented a lot of changes. For example, the fairies are regular sisters with their own personalities called Moll and Lora and they have a third sister of malevolent nature called Belvera. The star is a male Mothra called Leo, who has a lot of powers and goes through New Powers as the Plot Demands. This film introduces an environmental message and a focus on children. While these aren't bad concepts in and of themselves, people weren't expecting them in Mothra and this film wasn't well recieved as a result. Nevertheless, it did well enough at the box office to produce two more films.

In Monbetsu County of Hokkaido, the logging company Hokoku Corporation comes across a ancient monument, where a senior official takes out the Sacred Seal of Elias. Mr. Yuichi Goto takes it home to his family in Tokyo as a gift to his daughter, Wakaba, but trouble soon follows. The malevolent Belvera and Garugaru use the seal to brainwash Wakaba, tie up Mrs. Goto, and chase the brother up a tree with a dog. Taiki gets rescued by the Elias siblings. A property-destroying battle takes place between the siblings' mounts, Fairy and Garugaru. Belvera gets away with the Seal, but Fairy is injured and the Elias enlist the Goto family to get them to Hokkaido to stop the revivial of the dreaded Death Ghidorah. But they are too late and Death Ghidorah emerges from his prison. With the forest being burned and drained, the Elias have no choice but to summon Mothra, who is old and had been weakened by forming her egg. Things don't look good for Mothra until her offspring comes to her rescue. Can the mother and son pair defeat Death Ghidorah? Will the Sacred Seal of Elias end up in the right hands? Before the battle ends, someone is going to die...