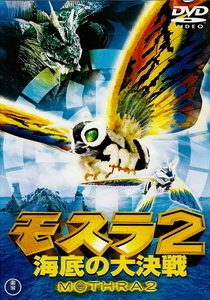 Following the success of Rebirth of Mothra, Toho created its sequel. Featuring a underwater civilization and the themes of greed and ocean pollution, Rebirth of Mothra 2 is often considered the weakest of the trilogy.

In Okinawa, Shiori Uchiura comes across Ghogo, a strange creature hunted by the evil Belvera. With the help of her classmates, Kohei Toguchi and Yoji Miyagi, they are able to escape her. Meeting with the Elias, they learn of Ghogo's origins in the ancient civilization of Nilai Kinai and are warned of the return of Dagahra. A monster originally created to clean up pollution, he instead poisoned the ocean with his acidic starfish, Barem. Now the Barem have come back along with Dagahra, and its up to the kids to find the treasure that would stop him. With the help of Ghogo, the Nilai Kinai temple rises from the ocean. While the trio search for the treasure, Dagahra is attracted to the temple and the Elias summon Mothra Leo to fend him off. But Dagahra is too strong and a Barem-covered Leo retreats into the protections of the temple. Meanwhile, Belvera has recruited two greedy fishermen in search of the treasure and they are willing to hurt the trio if it would give them riches. After being lost in the temple's endless corridors and clashing with each other, the two groups find the chamber of Princess Yuna. Her hologram will reveal the secrets of the treasure and how Leo could be saved so he could destroy Daghara...