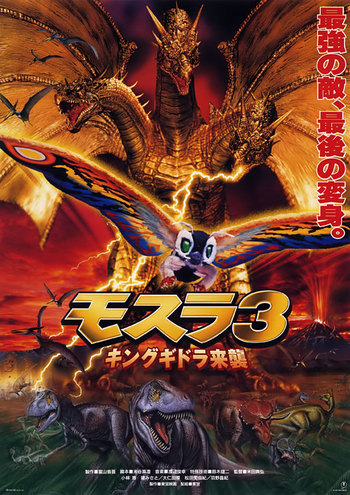 The final film in the Rebirth of Mothra trilogy, this movie is considered the strongest entry. The environmental message has been toned down, the monster battles have improved, probably helped by the return of King Ghidorah. The child protagonist is thoughtful and reserved, which many see as an improvement over his more vocal, childish predecessors. He and some of the Elias sisters go through character development, and actual tension is present.

Belvera has infiltrated Infant Island, tricking Moll and Lora into reviving the powers of the Elias Triangle. After a brief scuffle, she escapes, warning them of the approach of the King of Terror. A meteor lands in the forest of Fujiyoshida City, witnessed by the family of a troubled boy who dropped out of school. The boy, Shota Sonoda, goes to his favorite hiding spot in the forest. King Ghidorah has risen, spiriting children off to a dome in Aoki Forest and reigning destruction upon areas of Japan. There is a great aerial battle, but Mothra Leo is no match for King Ghidorah and Lora gets brainwashed in the process. Moll, Fairy, and Shota meet up and go to Leo, where he learns the children will become King Ghidorah's meal. Leo determine that the only way to stop the monster is to go back in time, and Moll sacrifices herself in the process. Her dying wish is for Shouta to save Lora, whose in the dome. While Mothra Leo squares off against the young but strong Cretacious Ghidorah, Shota must save Lora before they and all the children are eaten by Ghidorah...