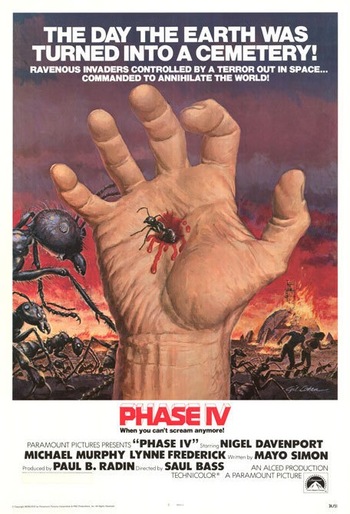 This 1974 Sci-Fi Horror film would seem, on the surface, to resemble many of the other "Man vs. Bugs" films that came out during The '70s (like The Swarm and Kingdom of the Spiders). Phase IV, however, is a bit more cerebral than its brethren; the conflict with the ants in this movie more resembles a game of chess than it does an action-packed physical battle. It was the first and only feature-length film made by Saul Bass, who is better known for his graphic designs and innovative opening title sequences for various classic movies, like Alfred Hitchcock's Psycho and Vertigo.

The film opens with the Earth undergoing the effects of a strange and rare cosmic alignment. Scientists aren't sure what effects, if any, the alignment has had on the planet and are quick to write it off. One scientist, however, notices some strange behavior beginning to occur amongst Earth's ant populations—they're becoming more intelligent and aggressive. They've begun attacking larger insects and animal species that are threatening them. Then the ants decide to take it a step further and attack a human community, destroying its houses and driving out its residents. (Mind you, the ants are still the same size as they were pre-cosmic-alignment, they've just grown in intelligence and number.) Alarmed, the authorities dispatch a team of two scientists to the region of infestation to investigate what's going on. One of the scientists is a middle-aged British biologist named Hubbs (Nigel Davenport)—he was the one who originally noticed the ants' weird behavior. And the other scientist is a young cryptologist named Lesko (Michael Murphy), whom Hubbs hired in the hope that he would be able to decipher the ants' communications and discover their intentions. The two men set up shop in the middle of the desert in a sealed geodesic dome equipped with poison sprayers and the best Seventies-Era technology government money can buy. Then they sit back and wait for the ants to make their first move...

Things don't go entirely as planned, however. A tragic accident involving one of their experiments results in the death of most of a farm family. Its lone surviving member—a teenage girl named Kendra (Lynne Frederick)— is forced to take up residence with the two scientists to await transportation out of the area. Things get worse when the ants sabotage the scientists' communication console, effectively cutting off everyone's sole means of escape. This might not have been a problem had the ants not proven themselves to be highly poisonous, and capable of building deadly traps. The humans aren't completely helpless—they have the science and ingenuity to counter the ants' measures. However, it remains to be seen which species will have the skill and intelligence to win the upcoming battle, much less survive it...

The film is regarded by many to be an underrated classic. Despite a potentially goofy-sounding premise, Bass manages to put together a suspenseful, deliberately paced film that has the viewer on the edge of their seat, eagerly awaiting whatever move either side will make next. It also features a lot of innovative close-up footage of ants who are so expertly manipulated and filmed that one might actually think they do possess human intelligence.

Although Phase IV once appeared on Mystery Science Theater 3000 during the KTMA days, it wasn't so much because of its quality as it was because of its sci-fi subject matter, its strange, ambiguous ending, and the fact that KTMA just didn't have a whole lot of movies in its library to choose from. (Pretty much anything they had that was remotely science fictiony —or remotely related to the Mystery Genre for that matter—wound up on the show.)

Not to be confused with the suspense movie Phase IV, which came out in 2002.