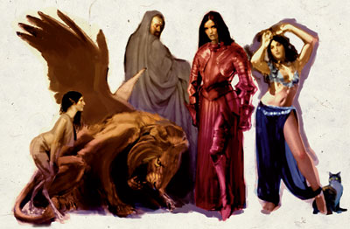 A complimentary sample Fantasy Pantheon®, courtesy of Trope Co.™.note From left, Shiallia, goddess of the woodlands; Nobanion, god of royalty and good beasts; Savras, god of seekers after truth; the Red Knight, goddess of military strategy; and Sharess, goddess of hedonism, sexuality, and cats.
The gods of this particular work may be different, but who does what among them?
Advertisement:

Gods, in general, tend to be gods of something in particular — in both fictional and real-life pantheons, each god is assumed to have some aspect of reality they rule over or are responsible for. When inventing a Fantasy Pantheon, there are a number of god archetypes that seem unavoidable — gods of the sun, the sea, war, knowledge and so on are almost always present. Maybe because their role is convenient for the story, easily understandable due to familiarity with Real Life mythologies, or simply that there are only so many domains a god can have and still be taken seriously.

These arrangements tend to draw of Classical Mythology — and to a somewhat lesser extent Egyptian Mythology and Norse Mythology as well — due to the prominent place this has in Western culture; other cultures' pantheons tend to play a lesser role in inspiring fictional assemblages of gods, unless a creator is deliberately basing their worldbuilding on other cultures... or, of course, the work in question originates outside of Western culture to begin with.

Note that when a work directly adapts a mythology, there is a high risk of Flanderisation. Not only Sadly Mythtaken is at work, but non-fictional gods tend to have multiple domains whose relations may be hard to grasp, though there is generally a good amount of Fridge Brilliance behind it.

The more common ones are: