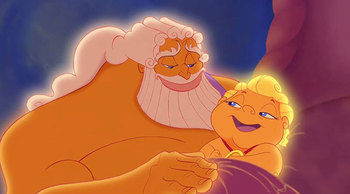 Light can blind and Light Is Good. And by "light is good", we mean it's good you aren't struck down by lightning.

Zeus was the Lord of Mount Olympus and Top God that ran Greece. He got his throne by killing his father and taking it and condemned anyone else who did the same, he ate his first wife (Metis), he cheated on his second wife/older sister (Hera) incessantly, allowed Hera to torment his demigod bastard sons, he chained Prometheus to a rock to have his liver eaten forever for giving mankind fire (until at least Herakles freed him), he unleashed pain and suffering on the Earth and had a mortal girl take the blame for it, smiting random humans with lightning from his ivory tower, et cetera. However, adaptations like to show Zeus as a cool guy that likes to party and is justified whenever he has to bring out a firm hand. Why? Because Heaven and Light = Good.

Gods associated with light and lordship over other gods are typically portrayed as heroic and relatable while their darker counterparts are super violent and manipulative and other icky stuff. It should be noted that this trope can apply to virtually any god/goddess of Classical Mythology, largely due to Values Dissonance and operating Above Good and Evil. And it should also be noted that the original Zeus was also capable of good deeds, therefore supporting a lot of good portrayals of him. For instance, he dotes on his children and even if they were born from his infidelities which incurred Hera's wrath, he would try his best to protect them from Hera. The sole exception is Ares, but even then, that was because Ares controls a domain that many humans dislike: war (unless you're from Sparta).

Aversions typically portray such gods as good but ignorantly destructive, usually causing trouble due to ignorance or gross incompetence.

A Sub-Trope of Sadly Mythtaken and a form of Adaptational Heroism.

Contrast with Everybody Hates Hades.

Not related to the fact that Zeus Really Gets Around. For the portrayal on that, see Double Standard: Rape, Divine on Mortal.