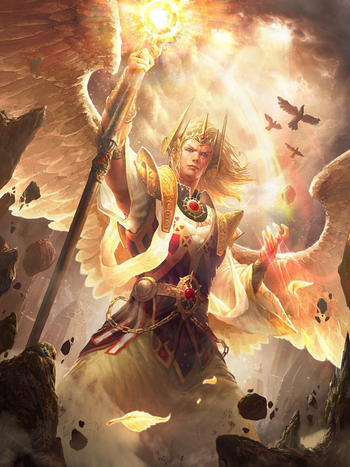 The Sun God's light can pierce through even the thickest clouds, bathing the land in warmth with his immeasurable strength.
"In order to protect all that is beautiful, my light will grant you magical powers."
— The Luminary of Light, Apricot Cookie(s)!
Advertisement:

One of the most common gods in fiction is the God of Light. This comes in four categories:

If a deity associated with darkness or the night also exists, these deities typically have one of two relationships with them. The first one is opposition; the God of Light will view the nocturnal deity as a bitter enemy, and in these cases, the other deity is also associated with evil, destruction, and malevolence — Light Is Good, Dark Is Evil, and Nice Day, Deadly Night are all usually at play in these cases, and if the light god is a God of Good then the dark one will be a God of Evil. The second type has the two deities exist in balance and harmony, peacefully overseeing different parts of the cycle of day and night, and will often have a close relationship as equals; this is especially common when the nocturnal deity is associated with the moon, giving the two deities a Night and Day Duo dynamic. On rare occasions this deity might be evil; this is more often true for general light deities or those associated with stars (especially the Morning Star) rather than solar ones, though some examples of the latter do exist. God of Fire can overlap. This deity's faithful may take the form of Stern Sun Worshippers.