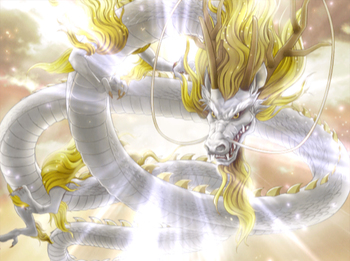 Dragons are almost universally depicted as beings of great power and majesty, to be revered or reviled depending on the story or culture in question. However, there are dragons in particular that are depicted as servants of the gods or something close to them, if not outright gods themselves. While their exact morality and status can differ, these dragons can range in power from that of a "mere" Physical God, to even that of Powers That Be. The latter depiction is particularly common in the religions of East Asian cultures, which through cultural exchange have often influenced Western portrayals of dragons in fiction. Draconic deities often tend to be associated with the ocean, storms, or both in particular.

This trope is Older Than Dirt as the Chinese have revered dragons for millennia, with the oldest known "true" dragon depiction in the world dating back to the fifth millennium BC, during the time of the Neolithic Yangshao culture

. Older proto-dragon depictions called "pig dragons" and "embryo dragons" have been found in the neighboring Hongshan culture which developed from even older dragon-like depictions from its predecessor, the Xinglongwa culture. This makes Chinese mythology the Ur-Example, Trope Maker and Trope Codifier.

A subtrope of both Our Dragons Are Different and Our Gods Are Different. Compare and contrast Dragons Are Demonic, which they can fall under if they and/or the gods they serve are also evil; and Draconic Abomination for particularly eldritch examples. A descendant of a divine dragon and a non-dragon may be a Semi-Divine (or full Divine Parentage) variant of Dragon Ancestry. This trope is commonly associated with Feathered Dragons due to the cultural connotations of feathered wings belonging to angels and the like (unless if the feathered dragon in question is a Feathered Fiend). While they may be Delightful Dragons if they have a friendly temperament, this isn't necessarily always the case. See also Kirin and The Four Gods.

If these dragons can breathe fire, their flames may be considered Sacred Flames due to having holy and/or divine properties such as being able to purify that which it burns.

Gaijin Goomba (both the real person and his cartoon goomba counterpart) explain to the viewers just what the Shussebora is.

Gaijin Goomba (both the real person and his cartoon goomba counterpart) explain to the viewers just what the Shussebora is.