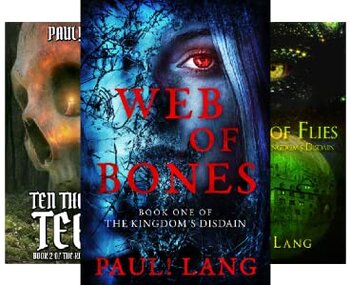 The first three books in the series.
"But I don’t want to cure world hunger. I want to make giant bugs."
— Keltnin, Web of Bones
Advertisement:

The Kingdom's Disdain (2020) is an ongoing series of fantasy novellas by Paul! Lang.

The first book in the sequence, "Web of Bones", follows a young man with partial amnesia who knows two things: that he's from our world, and that he's not in our world anymore. He is in the Kingdom of Laskmeer, a land of magic and monsters. He takes on the name Cardinal and teams up with the stoic elf, Mad Crossbones, to become monster hunters. Also among the main cast is Sareash, the Princess of Aldroy, who's dealing with political conspiracies the looming threat of The Rot Lord, a god of decay.

Cardinal doesn't remember his identity, but he does remember media and stories from our world. This makes Lampshade Hanging very common, as he recognizes tropes in this story from the video games he used to play.

The first few books are about Cardinal and Sareash fighting monsters and learning new powers, but as the series goes on focus shifts to human enemies and complicated political divisions.

Blue-and-Orange Morality: Zaiveeur, and Clokkens in general, has a moral code. It's just alien to most humanoids.
"...religion seemed to be part of everything they did here, like it was Alabama, only, Jesus was some kind of space dragon?"
"Good dragon Christians thought I was an evil wizard."
"That made sense. They may have almost killed me and filled my body with eggs, but they made me feel damn good about it."
"The world that played itself out in her eyes might have been preferable to the one we occupy—a world where everyone has a place and a purpose, where hard work is rewarded in equality, and where justice shines down like the sun."