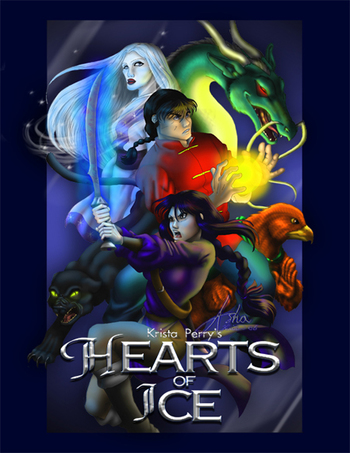 Hearts of Ice by Krista Perry Fisk is a Ranma ½ fanfiction, generally considered an early classic by the fandom. It was also legendary for the ten-years-long hiatus between the second-to-last and the final chapter.

Akane has been exiled to the realm of myths and legends by Cologne's magic, and now she must fight to survive as the sole mortal in a land of deadly supernatural creatures. To make matters worse, time runs faster there than on Earth, and her very existence is being "written out" of the human world.

Her quest to return to the mortal world before she's grown far too old for Ranma is paralleled by Ranma himself holding desperately onto his memories of her even as the world around him erases her existence, while Cologne schemes to thwart both of them.

It can be found in FanFiction.net

Fanart, as well as more links, can be found here