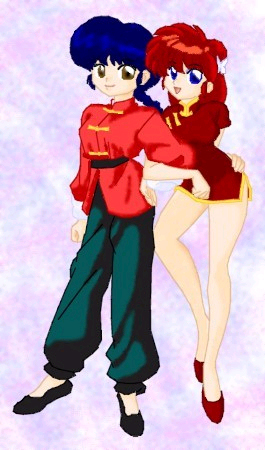 Nerima will never be the same again...
"The concept of Ranma being a girl full-time has been used with elegance, with depth, with wisdom, with angst, with a strange blend of tragedy and unexpected entertainment. Someone had to tackle it with absolute lunacy, insanity and the occasional real big mallet. Girl Days, or how I learned to stop worrying and love my bra."
Advertisement:

Ranma's mother Nodoka has decided that her son's manhood is beyond doubt... but she is seriously concerned about her womanhood. Therefore, she convinces to Ranma to start the Girl Days training program: he must remain a girl for the next two months, learning how being female. Ranma—who for first time in his/her life almost wishes that her mother would have chosen the seppuku option—sets to "understand her femininity with masculine determination" as he wonders how he will survive the next months...

Girl Days is a Ranma ½ fanfic written by Robert Haynie (a. k. a. Kenko), who uses the old "Ranma has to be a stay a girl for a while" fanfic plot, but—remembering what the show is supposed to be about—giving it a light-hearted, extremely comic twist.

. Unfortunately a chapter and one-shot spin-off are missing, and Kenko's homepage died a while ago (you still can find a version of it, though

), but links to all chapters -as well as to the spin-offs and the sequel, Redheads

-, can be found in this page

to Spanish was also in progress.

This work has examples of the next tropes:

Akane: "Ranma, what's really going ON here?!?"
Ranma: "Exactly what I said. Mom's got it into her head that I'm both a guy AND a girl and that I need training on the girl part. I'm supposed to stay a girl for two whole months of my own free will and then at least one day out of every four after that as 'maintenance'. Dresses and the whole nine yards. My life is hell."
Akane: "Well... after she leaves you can change back, and—"
Ranma: "I can't. I promised her I'd try. I won't break a promise to Mom. I won't hurt her ever again."