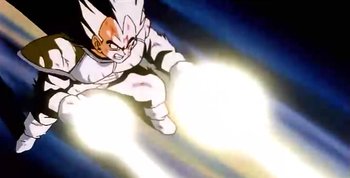 "This is what happens to anyone who asks me about Kakarot's Power Level again!"
"You can only beat it by channeling your own spiritual energy into it! Because it's the ki boss."
— Troper Fawriel, on this

infamous raocow videonote Don't worry, it will show up at the top because Raocow commented on it.
Advertisement:

A staple of the martial arts genre. Ki (or chi or qi in Chinese; traditional Chinese: 氣, simplified Chinese: 气, Japanese: 気) is the life force energy (and, to a lesser extent, emotions/disposition) of the martial artist and/or the world around him; true masters can tap into that energy directly and use it for what amounts to superhero-style attacks. Compare Chi with Mana.

Sometimes Ki is divided into subtypes associated with particular kinds of environments or supernatural beings, the most common example being some kind of demonic Ki which has properties of Mana and acts as The Dark Side (often called "youki", as in Youkai Ki). In some works only this special Ki is used, with regular human Ki being either non-existent or just too weak to do anything with.

The original Chinese concept holds that a person has two sets of Ki, a finite set that you're born with and a freely replenishable set that you accumulate over the course of your life. The latter can be increased by meditation, proper diet, martial arts training, etc. When the Ki you were born with runs out, you die. But training yourself to use the replenishable Ki to sustain your body instead and thus conserve the original Ki, you increase your lifespan. If this version of Ki Manipulation is included in a story, it can be used to give an "Asian" flavor to tropes like Wizards Live Longer (specifically, Kung Fu Wizards Live Longer) and Cast from Lifespan.

If Functional Magic also exists in the 'Verse, there's usually a distinction made between the two, comparable to the distinction between Psychic Powers and Functional Magic in Western Speculative Fiction. If no distinction is made, it's Supernatural Martial Arts. If a character can use both individually, then they're a Kung-Fu Wizard. At times may overlap with Background Magic Field. Sometimes Ki Manipulation is a part of some Martial Arts and Crafts, making it either Rule of Funny or Rule of Cool.

Having a large amount of Ki will usually produce a Battle Aura.

Common types of Ki Manipulation include:

May be represented with Blasting Time. See also Hand Blast, an attack which is similar in appearance. The Spirit Cultivation Genre of literature popularized the idea of increasing Ki with training.

Shredder's ultimate technique lets him concentrate his energy into a single body blow that causes internal injuries severe enough to make Batman bleed from the mouth. Splinter is also said to know it.

Shredder's ultimate technique lets him concentrate his energy into a single body blow that causes internal injuries severe enough to make Batman bleed from the mouth. Splinter is also said to know it.