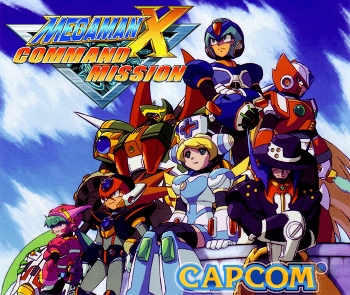 "I've got some introductions to make."
"Your mission is to infiltrate Giga City and halt the activities of Epsilon's organization, the Rebellion. I'm afraid the team that went in before you has likely perished. You are our final hope. If you fail this mission, then...We will have no choice but to launch an indiscriminate assault on Giga City."
— Colonel Redips
Advertisement:

Mega Man X: Command Mission is a video game released in 2004 by Capcom for the PlayStation 2 and Nintendo GameCube. It is a Gaiden Game to the Mega Man X series, and differs by being a JRPG adventure rather than a platform action game.

In the year 22XX, a powerful new ore called Force Metal is discovered in the middle of the Pacific Ocean, and the artificial island Giga City is constructed to mine it. However, things go wrong when a mysterious Reploid named Epsilon forms a Rebellion Army and instigates a revolt on the island. With the situation looking tense, a team of elite Maverick Hunters — X, Zero, and Shadow — are sent to Giga City to arrest Epsilon and put an end to the civil unrest. Along the way, they are forced to band together with the locals in order to save the world from the dangerous potential of Force Metal.

Given the major story discrepancies between this game, Mega Man X8, and the Mega Man Zero series, it is generally interpreted that this game is set in an Alternate Timeline. However, with the X series' abandonment, it remains to be seen if that could be true or if the characters from this title could appear as canon immigrants in the mainline entries.

Regardless, characters and designs from Command Mission have been featured in Mega Man X DiVE and TEPPEN, both of which are mobile phone crossover games.