For characters from the main Mega Man X games, see here. X, Zero and Axl's pages should not be duplicated here. 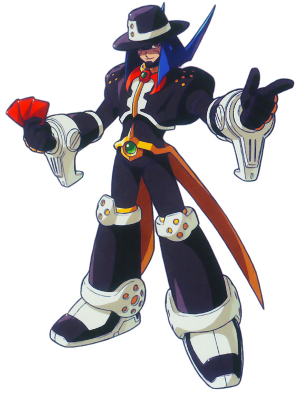 The first character that joins X is Spider, a Bounty Hunter with a gambling motif who at first is looking to collect on X's head. After seeing Aile's ID, he joins X due to Aile being a former partner of his. 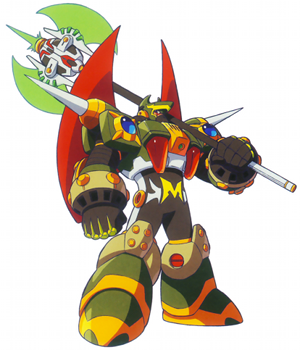 Steel Massimo is the name of two characters: a hero who refused to join the Rebellion and so was captured and tortured, and a player character who took up the real Massimo's armor and name. This second Massimo joins X and Spider when they infiltrate Tianna Camp in order to rescue Nana. What he lacks in courage he makes up for in determination. 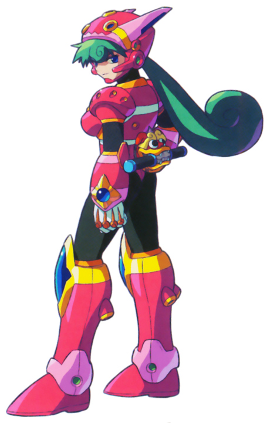 A thief who specializes in stealing high-end technology and leaking information. She was looking to steal the Force Metal Generator from Gaudile Laboratory, and ends up befriending and kidnapping the naive Cinnamon. She then joins X's team, mostly because the Rebellion is stealing precious valuables she could be stealing!

A young Reploid who lives a sheltered life in Doctor Gaudile's lab, created to house his Force Metal Generator invention. Although she's naive and shy, she's the one who convinces both Gaudile and Marino to join X against the Cadre because she wants to make her own decisions and help her new friends. 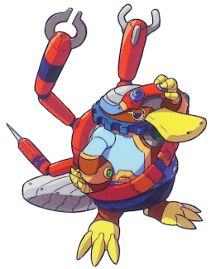 A platypus Reploid who developed the Force Metal Generator and built Cinnamon. He's determined to stay out of the conflict between X and the Cadre, but Cinnamon eventually convinces him to join the cause.

The leader of the Resistance. He was initally held hostage by Wild Jango until X freed him, after which he assumed command and assisted the team with his clever strategies and deep knowledge of Giga City.

A young computer specialist who worked at Central Tower before being kidnapped by Silver Horn and forced to work for him as a sys-op at Tiana Camp. Once X and his friends free her, she becomes the navigator for the team. 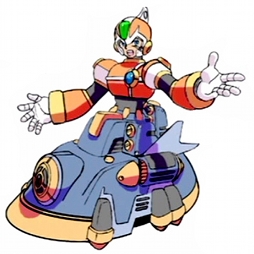 A member of the Resistance against the Rebellion Army, he was apparently a former partner of Spider's who was injured and lost the use of his legs, replacing them with a hover-wheelchair of sorts. After agreeing to work with X and giving him his ID, he sacrifices himself to allow X to escape the endless number of Preons converging on their location. Not to be confused with the Mega Man ZX protagonist with the same name. 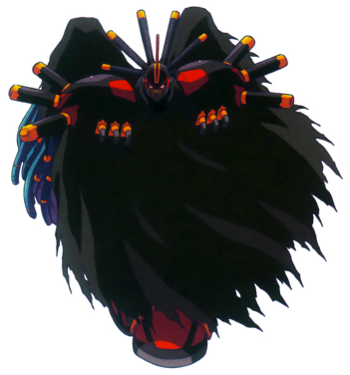 The leader of the Rebellion Army. He was actually the result of secret Supra Force Metal experiments and was the only subject to not go Maverick or be destroyed for failure. Given extraordinary abilities thanks to the Supra Force Metal, he sought to give all reploids the same power to evolve beyond what humans had created them to be...whether they actually wanted it or not. 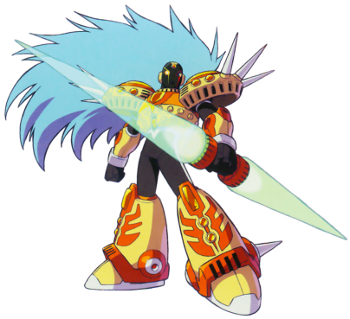 A member of the Rebellion Cadre, and Epsilon's right hand man. He's the most sympathetic of the Cadre, and first to make X question just how 'evil' they really are. 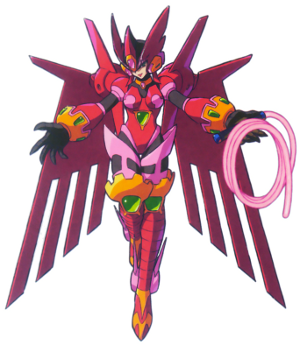 Another member of the Rebellion Cadre. She initially was the chief of security at the Force Metal Research Facility until Epsilon convinced her to join him. She seemed to share a tender relationship with Scarface, only giving him 'permission' to use her key. 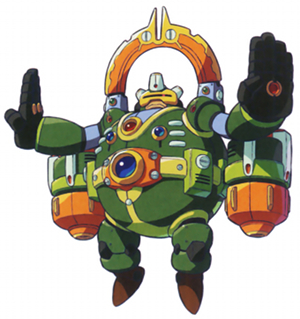 The last member of the Rebellion Cadre. Unlike his comrades, Botos talks big about the Cadre's cause but is actually a pompous coward only out for his own gain. When Ferham is defeated by X and his party, he rips her key from her body so he can steal the Supra Force Metal for himself. He's killed by an unknown assailant who seems to look very familiar… 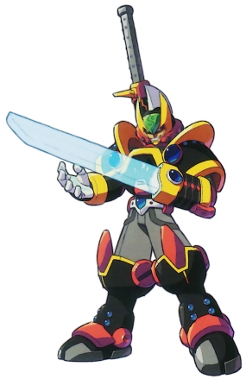 A member of the Far Eastern Maverick Hunters who was sent to Giga City along with X and Zero. When he and Zero are split up from X, he betrays the Hunters and joins the Rebellion for power. He later returns, powered up by Supra Force Metal, in order to challenge X. Upon his defeat, he tries to fire a last ditch attack, but is defeated by Zero and Spider. 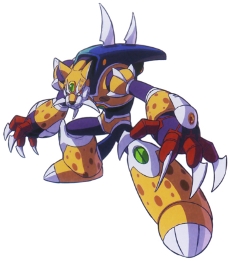 A fleet-footed bobcat Reploid keeping Central Tower captive for the Rebellion at the time X drifts there from Lagrano Ruins. He also seems to be aware of Spider's reputation as a bounty hunter, even hiring him to eliminate X. 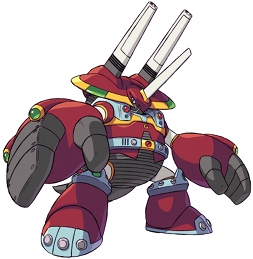 A hulking triceratops-type reploid who operates an undersea POW camp for the Rebellion Army. He seems to run the camp with an iron fist, and behaves in a very arrogant, drunk-with-power manner. Spider and X are sent to his camp to rescue the Resistance base operator Nana, the prisoner who incurs his wrath more than any other prisoner that he hasn't already dismembered… 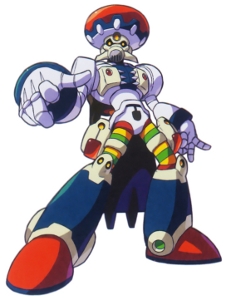 A computational reploid who used to be a research partner to Professor Gaudile. He appears in Gaudile's laboratory first to try to convince Gaudile to join the Rebellion, then to wrest control of Gaudile's Force Metal Generator. Despite hinting that he knows of Epsilon's good intentions, he himself acts in an insane, power-hungry manner. Has an "evolved" form called Mad Nautilus, which looks like Exactly What It Says on the Tin. 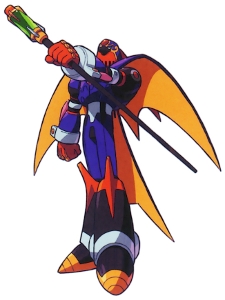 A barn swallow type Reploid who, though native to Giga City, was sent back home by the Federation government to help out with peacekeeping before defecting to the Rebellion. He is in charge of the Ulfat Factory and its creation of PREONs via the computer at the core of the factory called Duboar. He's also the only one who can control Duboar, as the machine goes berserk in his absence. 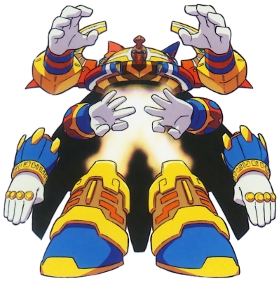 A member of the Rebellion Army. He's the boss guarding the Gimialla Mine where Supra-Force Metal is reported to have been found. However, it was all a trap to get X's party locked into the mine's command room, where he planned to destroy them either through battle or by pulling a Red. This led to Spider's sacrifice, a key event driving the events of the second half of the game… 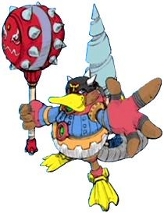 A strange insane duck-styled Reploid working for the Rebellion as a hidden boss. Is apparently assigned to guard a certain treasure that could be useful to the heroes… 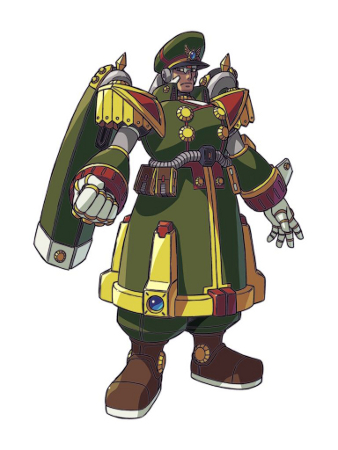 The leader of the Far East Maverick Hunter HQ. He acts as X and Zero's commanding officer and oversees their infiltration into Giga City until signal jamming makes communication impossible. But when X and his team finally get all the Supra Force Metal from Epsilon and give it to Redips, he betrays them and labels them as traitors. He uses the SFM to declare himself a god and intends to rule over all reploids. 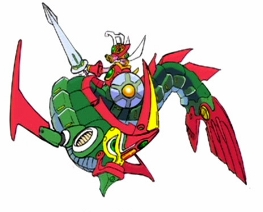 A member of the Far East Maverick Hunters, completely loyal to Redips. When Redips reveals his plans, Dragoon attempts to defeat X's team but is himself defeated.

A Reploid hidden away in Tianna Camp, who calls herself the "Super Idol" and seems to be working on a dance routine. She becomes agitated upon being walked in on by the party, oblivious to the powerful item inside her room… 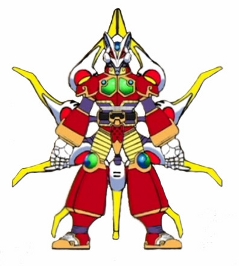 A group of dangerous criminal reploids who fight using a sort of robotic chi instead of elemental powers, sealed away in the lowest shaft area of Central Tower, which can only be accessed by a key acquired after defeating the game. They all look alike, and all have nine tail spaces on their backs, though how many tails are actually there varies between each one by name in escalating order from the first member encountered, Onetail, to the leader, Ninetails. The most powerful enemy in the game by far, including all the other Tails and other hidden bosses, Ninetails seems to be the one they're all based off of.