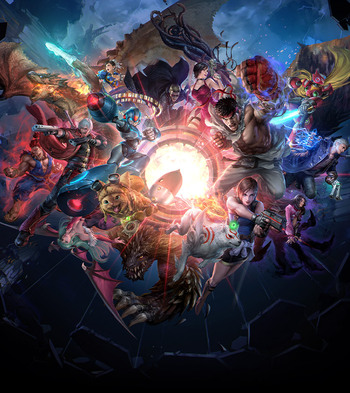 TEPPEN is a free to play mobile Collectible Card Game developed by both Gung-Ho Entertainment and Capcom and also published by the former. Initially teased as "Project Battle" after having early alphas sent to prominent members of the Fighting Game Community, the game is a Crisis Crossover between multiple Capcom properties that span its decorated history over the past several decades.

The story (or whatever exists of one) is set within the Land of Illusion, a world that offers the "truth", according to an individual's own wishes. Several heroes from all walks of life venture forth into it to seek what this "truth" could be, coming into conflict with one another.

Gameplay takes some cues from other popular card games such as Hearthstone: Heroes of Warcraft and Magic: The Gathering. Heroes in TEPPEN each belong to four different color classes, which represent different playstyles and archetypes: Red and Green each focus on straightforward offense and defense builds, Purple is a trickier archetype aiming to restrict enemy movement, and Black is a high-risk, high-reward class that allows for the use of tougher units which often comes at the cost of losing others or even life from the Hero that controls them.

Cards are divided into two: units that can be deployed into one of three empty slots on each player's side of the board, and actions that can result in a variety of effects like buffs or debuffs. Each use of an action card triggers a temporary stop of the game's timer called an Active Response, which gives the opponent a chance to play an action of their own and continues until the timer runs out or a player chooses to resolve it. Every card comes with a MP cost that must be met before they can be played. MP by itself can normally be gained automatically over time, but the overall pool is impacted by how many colors are in a player's deck; more colors restricts it whereas a single color leaves it intact.

Finally, each of the Heroes comes equipped with three Hero Arts, one of which must be assigned to the deck before battle and can certainly help turn the tide. Hero Arts are triggered by meeting an AP count, which is built up by the cards that the Hero plays in proportion to their MP cost (for example, a card with a 6 MP cost would make the AP count rise up by 6).

Since launch, the game has seen the rise of several new expansions that have added new Heroes, cards and gameplay mechanics every other month.

Not to be confused with one of Namco's iconic Fighting Games, Tekken.

Tropes associated with TEPPEN include the following: