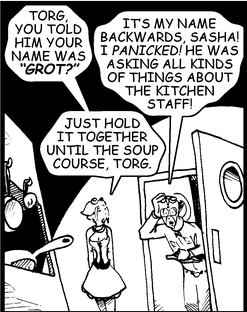 "I told them your name was Ass-ass."
"Hello, my name is Mr. Snrub, and I come from, er... someplace far away!"
— Mr. Burns, The Simpsons
Advertisement:

When someone has to think of a pseudonym for themselves, an oddly popular choice is their own name but written backwards. You'd expect them to be more imaginative, and smart enough to realize that such a pseudonym can easily give away your true identity. Sure enough, most of the time someone notices, often by exclaiming "[Saila Sdrawckab] spelled backwards is [Backwards Alias]!"

A name is only a Sdrawkcab Alias if the alias and the original name belong to the same person In-Universe. The Super-Trope is Sdrawkcab Name, which covers backwards names in general.

When Dracula does this, see Alucard. For other ways to make a quick alias, try Character Name Alias, Line-of-Sight Alias, or Sue Donym.