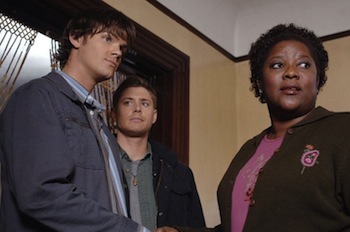 Oh, you boys grew up handsome. [to Dean] And you were one goofy-looking kid, too.
Dean: All right. I've been cruisin' some websites and I think I found some candidates for our next gig. A fishing trawler found off the coast of Cali, its crew vanished. And, uh, we got some cattle mutilations in west Texas. Hey! Am I boring you with this hunting-evil stuff?

Sam: No, I'm listening. Keep going.
Dean: And here, a Sacramento man shot himself in the head. Three times. Any of these things blowin' up your skirt, pal?

Sam has a vision of their old home in Lawrence, Kansas

, and Sam and Dean return to find restless spirits are haunting their childhood home.

Sam has a nightmare about something attacking an innocent family in the Winchester's old family home in Lawrence, Kansas. They investigate and enlist the help of a psychic medium and friend of their father, Missouri Mosely, to defeat what turns out to be a poltergeist. When Sam's premonition starts to come true and the brothers are unable to defeat the poltergeist, the ghost of their mother Mary appears and sacrifices herself to save her sons. Once the brothers leave town, it's revealed that their father John was there the whole time, keeping an eye on Sam and Dean with Missouri's help.

For this episode = 2 ghosts. This is the first episode of the series where no humans die.