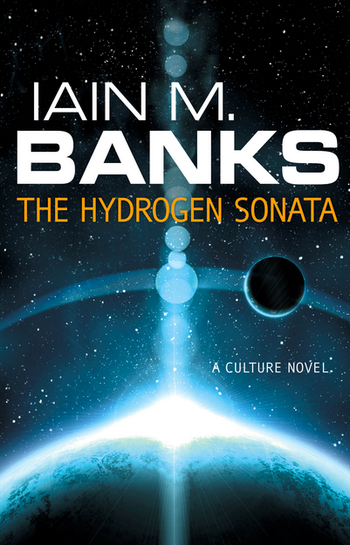 The Hydrogen Sonata is the final novel of The Culture series. Set approximately one thousand years after Consider Phlebas, the book is a Cloak and Dagger thriller set against the backdrop of the end of a powerful, venerable civilization. The Gzilt, a militaristic civilization of reptilian humanoids, have decided to Sublime by referendum, choosing to leave the physical world and Ascend to a Higher Plane of Existence. As scavenger civilizations circle to pick over the eventual remains, a secret going back to the dawn of the Gzilt civilization threatens to derail the whole process and spark a war if revealed. Gzilt citizen Vyr Cossont finds herself caught in the middle of the Culture frantically trying to find the truth as well as put out the fires, and factions of the Gzilt who wish to protect this secret at all costs.

The Hydrogen Sonata provides examples of: