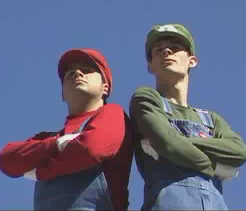 STUPID MARIO BROTHERS!
"And was like "yeah this is crap it's going nowhere"... Boy was I wrong!"
— Richard Michael Alvarez, creator of the series, on his opinion of the creation of the series
Advertisement:

channel. It is independently made by a group of friends who also made Youtube News and Arthur vs. The Druids vs. The Grail.

The show features a Massive Multiplayer Crossover of many Nintendo characters such as the titular Mario and Luigi, as well as a few from from other franchises. It places them in the real world, where they can do anything from playing their own game to saving the entire world.

The show officially ended on June 5, 2012 with episode 75 "The Super Mario Brothers".

It received a sequel with the Darker and Edgier The Plumber Knight Returns set decades after the events of Stupid Mario Bros, and then on November 20, 2015 another sequel titled Stupid Mario World; this series is closer to the comedic tone of Season 1, and picks up few years after the original series (well before the events of The Plumber Knight Returns). The series concluded with a second movie, Stupid Mario Brothers: Legacy, released in 2017.

Now has a recap page in construction.