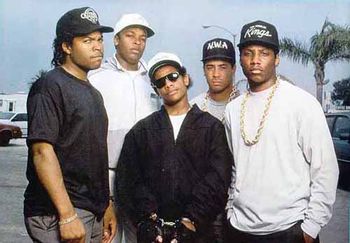 The World's Most Dangerous Groupnote Left to right: Ice Cube, Dr. Dre, Eazy-E, DJ Yella and MC Ren.
"You are now about to witness the strength of street knowledge."
—Dr. Dre in the opening of "Straight Outta Compton"
Advertisement:

N.W.A (short for "Niggaz Wit Attitudes") was a Compton, California-based hip hop group widely considered one of the seminal acts of gangsta rap, most directly through their first album, Straight Outta Compton, which instigated a shift within the genre towards the hardcore stylings of the subgenre, as the production and the social commentary in their lyrics were revolutionary at the time.

Active from 1986 to 1991, the group endured controversy due to the explicit, confrontational nature of their lyrics. They were subsequently banned from many mainstream U.S. radio stations, and even at times prevented from touring — yet the group still sold over 10 million units in the U.S. alone, mostly through word of mouth and underground magazines. Although largely unknown at the group's inception, members Dr. Dre, Ice Cube, Eazy-E and MC Ren would all go on to become platinum-selling solo artists, and some of them household names within popular music.

The group began at the hands of member Eazy-E, who began Ruthless Records with Jerry Heller. Ruthless released N.W.A. and the Posse in 1987 with Macola Records. N.W.A. was still in its developing stages, and only credited on four of the eleven tracks, notably the uncharacteristic electro hop record "Panic Zone", "8Ball", and "Dopeman", which first brought together (on wax) Ice Cube, Dr. Dre and Eazy-E. Also included was Eazy-E's solo record "Boyz-n-the Hood". In 1988, rapper MC Ren joined the group.

N.W.A released Straight Outta Compton in 1988. With its famous opening salvo of three songs, the group reflected the rising anger of the urban youth. "Straight Outta Compton" introduced the group; "Fuck tha Police" protested police brutality and racial profiling, and "Gangsta Gangsta" painted the worldview of the inner-city youth. While the group was later credited with pioneering gangsta rap, N.W.A. referred to their music as "reality rap".

The group's music was propelled by their distinct style. Ice Cube and MC Ren's lyrics, centered around the violence and anger of disenfranchised inner-city residents, were complemented by simple production based on heavy beats courtesy of Dr. Dre and scratched samples by co-producer DJ Yella.

"Fuck tha Police", perhaps the group's most notorious song, brought them into conflict with various law enforcement agencies. Under pressure from Focus on the Family, Milt Ahlerich, an assistant director of the FBI, sent a letter to Ruthless and its parent company Priority Records advising the rappers that "advocating violence and assault is wrong and we in the law enforcement community take exception to such action". This letter can still be seen at the Rock and Roll Hall of Fame in Cleveland, Ohio. Policemen refused to provide security for the group's concerts, hurting their plans to tour.

Straight Outta Compton was also one of the first albums to be given the new Parental Advisory label, then in its early stages: the now-iconic label then only consisted of "WARNING: Moderate impact coarse language and/or themes". However, the taboo nature of N.W.A's music was the greatest part of its mass appeal. The media coverage compensated for N.W.A's virtual lack of airplay, and their album eventually went double platinum.

N.W.A's next release was some five months later, the EP 100 Miles and Runnin', but would not be equally diplomatic. Ice Cube left in late 1989 over royalty disputes; having written 45% of Straight Outta Compton himself, he felt he was not getting a fair share of the money and profits. He wasted little time putting together his solo debut, 1990's AmeriKKKa's Most Wanted, but avoided mentioning his former label mates. The song "100 Miles and Runnin'" is also notable for being Dr. Dre's final uptempo record, which had been a common feature of late-80s hip hop.

The group's second full-length release, 1991's Efil4zaggin ("Niggaz4Life" spelled backwards), re-established the group in the face of Ice Cube's continued solo success. The album is considered by many to be Dr. Dre's finest production work, and heralded the beginning of the "G-Funk era". It also showed a clear animosity towards their former member, and derogatory references to Ice Cube are found in several songs.

Niggaz4Life would be the group's final album. After Dr. Dre, The D.O.C. and Michel'le's departure from Ruthless for Death Row Records, in which Eazy-E was allegedly coerced into signing away their contracts (while however retaining a portion of their publishing rights), a bitter rivalry ensued. Dr. Dre began the exchange with Death Row's first release, 1992's "Fuck Wit Dre Day (And Everybody's Celebratin')", and its accompanying video featured a character named Sleazy-E who ran around desperately trying to get money. The insults continued on The Chronic with "Bitches Ain't Shit". Eazy-E responded in 1993 with the EP It's On Dr. Dre 187um Killa and the tracks "Real Muthaphuckkin G's" and "It's On". Eazy-E accused Dr. Dre of homosexual tendencies, calling him a "she thang", and the music video for "Real Muthaphuckkin G's" shows promo pictures of him wearing make-up and a sequined jumpsuit. The photos were from Dr. Dre's World Class Wreckin' Cru days, when such fashions were the style of West Coast Electro hop prior to N.W.A's popularizing of gangsta rap.

After Eazy-E's death from AIDS complications on March 26, 1995 (just over a month after being admitted to the hospital, and 10 days after publicly announcing his diagnosis), all bad blood between the group ceased. Dr. Dre and Ice Cube would later express their re-evaluated feelings to their old friend on 1999's "What's The Difference" and "Chin Check", 2000's "Hello", and 2006's "Growin' Up".

With the success of the biopic Notorious, New Line Cinema reps announced to Entertainment Weekly's "Hollywood Insider Blog" that N.W.A's story was in development to become a theatrical release. The film, titled after the group's first album and directed by F. Gary Gray, was released on August 14, 2015.

Perhaps due in part to the newfound hype surrounding the group, they were inducted into the Rock and Roll Hall of Fame in 2016, only the fifth hip-hop act to receive the honor (following Grandmaster Flash and the Furious Five in 2007, Run–D.M.C. in 2009, Beastie Boys in 2012, and Public Enemy in 2013). Rolling Stone ranked them 83rd on their list of the "100 Greatest Artists of All Time".

Yo, man, there's a lot of tropes out there:

Damn, that shit was dope!
Feedback

In this sketch from the BBC3 series Rush Hour, Adam Buxton makes a kid-friendly version of NWA's "Fuck tha Police", which contains a message that is the exact opposite of the original song.

In this sketch from the BBC3 series Rush Hour, Adam Buxton makes a kid-friendly version of NWA's "Fuck tha Police", which contains a message that is the exact opposite of the original song.