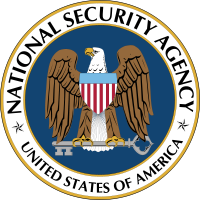 In God We Trust. All others we monitor.
No Such Agency
— Unofficial name.
Advertisement:

The National Security Agency/Central Security Service (NSA/CSS) is a communications intelligence agency of the United States government, part of the Department of Defense.

The NSA is rumored to run the ECHELON communications-monitoring system, together with equivalent signals-intelligence agencies in Britain (GCHQ), Canada (CSEC), New Zealand (GCSB), and Australia (DSD). The system's capabilities are suspected to include the ability to monitor a large proportion of the world's telephone, fax and data traffic, according to a December 16, 2005 article in the New York Times.

Naturally, in addition to civilian traffic, they also listen in on foreign military and diplomatic traffic as well.

As of 2008, NSA has been directed to help monitor U.S. federal agency computer networks to protect them against attacks. NSA also released as part of the public distribution, a set of upgrades called "Security Enhanced Linux" to improve the Linux Operating System with additional security.

Since its inception to the present day, the NSA is rumored to have the most powerful collection of computers in the world. While the exact entirety of what they now have is classified, a number of supercomputers they used that they now consider obsolete are in the United States National Cryptologic Museumnote which is on the grounds of Fort Meade, adjacent to the NSA's headquarters. One hint to the extent of the NSA's computer usage is that they've opened many satellite offices in the past 20 years. This is not because of some sinister scheme (we hope) but because the HQ at Fort Meade already eats up all the spare electricity in the Baltimore power system.

NSA's work is limited to communications intelligence; it does not perform field or human intelligence activities. So, no Secret Police, and no Splinter Cells.note  Special mention should go to the Special Collection Service

, which actually does infiltration jobs by inserting eavesdropping equipment in difficult-to-reach places, such as foreign embassies, communications centers, and foreign government installations. It should be noted, however, that they are under liason from the CIA, so they are CIA field agents that works for the NSA.

By law, NSA's intelligence gathering is limited to foreign communications, although there have been numerous reports that the agency does not always abide by these laws. George W. Bush famously removed most of the limits on the NSA, even though it was illegal. Some, but not all, of this illegal activity was made legal after the fact when he pushed Congress to modify the laws. Another form of Loophole Abuse the NSA found was to get help through the "Five Eyes" (or FVEY) alliance, formed by the US's closest allies of the United Kingdom, Canada, Australia, and New Zeland - as well their NSA counterpartsnote GCHQ, CSE, ASD, and GCSB respectively; since most of them have the same domestic restrictions, they allow the other countries to spy on their citizens and then share the intelligence they found on the target, this means the NSA will spy on British citizens and give what they found to the GCHQ, while the GCHQ will spy on American citizens and give the intel to the NSA. The 2013 PRISM scandal showed this activity has carried on well after Bush left office and doesn't look to be changing any time soon.

The creation of NSA was authorized in a letter written by President Harry S. Truman in June 1952. The agency was formally established through a revision of National Security Council Intelligence Directive (NSCID) 9 on October 24, 1952, and officially came into existence on November 4, 1952. President Truman's letter was itself classified and remained unknown to the public for more than a generation.

Before the NSA proper was The Black Chamber, so called in part because of the book about it. It was established in World War I and had a cover as a civilian coding agency. During the 20's funding was pulled because the secretary of state considered decryption to be unfair. Denied funding, the head of it wrote a book about it and tried to keep it open.

The NSA was around for several years before the U.S. government acknowledged its existence, thus the "No Such Agency" moniker.note The NSA was listed in the 1957 and subsequent editions of the U.S. Government Manual, which was available in most public libraries. Because of this mystery, the NSA has become the agency of choice for many Government Conspiracy and Hollywood spy types, and is one of the most widely misrepresented government agencies in fiction. Of course, it's become a bit harder to use the NSA as a generic "super top secret black ops" force in recent years given that it's now common knowledge what they actually do.

Certain movies or TV series will play up inter-department rivalry between the NSA and their better known sister-agencies, the Central Intelligence Agency and the Federal Bureau of Investigation. Sometimes a movie or TV show will haphazardly blur these agencies together into "generic government conspiracy Men in Black". In reality, the rough difference between them is that the NSA handles "SIGINT" (signals intelligence: wiretapping, cryptography, etc.) while the CIA handles "HUMINT" (human intelligence: actually sending in human operatives for face-to-face contact). For example, if at the end of a movie the bad guy's right-hand lieutenant shoots him and reveals that he was an "NSA double-agent" the entire time, that's an anachronism: its the CIA that sends in human information gathering agentsnote They may and likely do work together though: CIA might have the agents on the ground, but they would rely on the NSA to handle any kind of long-term decryption operation that they start. Inversely, the NSA might need to get specific information for an investigation, and liaise with the CIA to get an officer in place to get that information. Separating the two agencies from who they are and what they do is not as strongly defined as it may seem. In terms of structure, the NSA is part of the Department of Defense, while the FBI is part of the Department of Justice. The CIA is an independent agency answering directly to the Director of National Intelligence, who answers directly to the President.

Do not confuse with NASA.

Your IP address has been noted, logged, and cross-referenced to identify you. Have a nice day.