Getting High on Their Own Supply 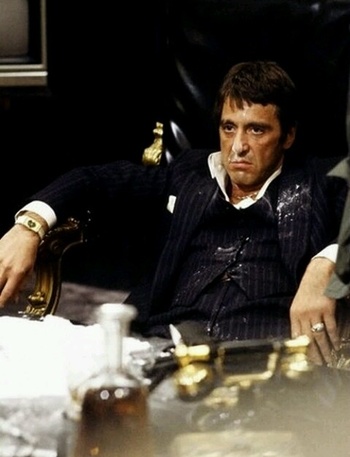 Mr. Tony Montana, snorting his sorrows away.
"To be a dopeman, boy you must qualify,
Don't get high off your own supply."
— N.W.A, "Dopeman".
Advertisement:

In the 1983 film Scarface, one of the movie's most memorable quotes was Elvira Hancock's advice to Tony Montana on selling drugs: "Don't get high on your own supply" — advice that Tony Montana famously ignored and ultimately paid the price for. In fiction and real life, drug dealers, be they high-level kingpins or low-level street hustlers, often fall into the trap of addiction by recreationally using their own product.

This reckless waste of their resources usually leads to:

However, this trope isn't exclusive to just drug dealers. Heroes or villains who rely on using a Super Serum or Psycho Serum to get their powers can often get too attached to it, leading to similarly disastrous results. This is also often used as a way to deconstruct Damn, It Feels Good to Be a Gangster!.

This trope has been quoted or alluded to by many Hip-Hop artists since the release of the 1983 movie.

A sub-trope to Hookers and Blow. Compare Addictive Magic. Contrast Straight Edge Evil. Not to be confused with Believing Their Own Lies, despite this trope sometimes being a metaphor for that one.