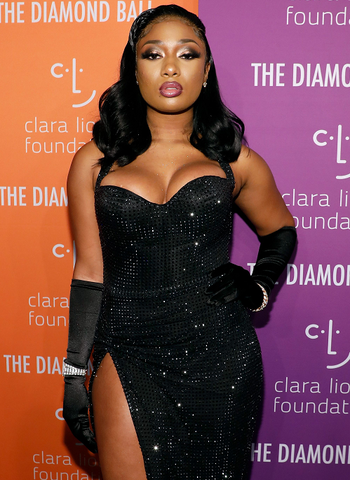 I remember hoes used to clap for me happily
Now I'm bossed up and them same hoes mad at me
Acting like they ridin', whole time tryna pass me
Watchin' me go through it, still tryna drag me
Actin' like you winnin', if you think about it, actually
Are they supportin' you or really just attackin' me?
I don't give a fuck 'bout a blog tryna bash me
I'm the shit, per the Recording Academy
—"Thot Shit"
Advertisement:

Megan Jovon Ruth Pete (born February 15, 1995 in Houston, Texas), known professionally as Megan Thee Stallion (pronounced "Megan The Stallion"), is an American rapper, actress, singer and songwriter. She first rose to fame through viral videos on social media and she released the EP Tina Snow in June 2018. Her first full-length project, Fever, was released in May 2019. In 2020, her career reached new heights with the EP Suga which spawned her biggest hit to date, "Savage", and her hit collaboration with Cardi B, "WAP".