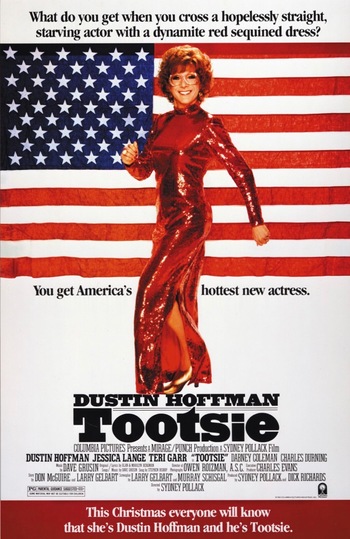 Tootsie is a 1982 romantic comedy film starring Dustin Hoffman and Jessica Lange and directed by Sydney Pollack, who also has a supporting role. Larry Gelbart (M*A*S*H) and Murray Schisgal wrote the screenplay, with uncredited contributions from Barry Levinson and Elaine May.

Michael Dorsey (Hoffman) is a struggling actor in New York City who, despite being very talented, has trouble finding work because he's too much of a perfectionist and consequently very difficult to work with. Desperate for money to finance a play written by his roommate Jeff (Bill Murray), Michael goes to his agent George (Pollack), who tells him that no one in New York will hire him.note George tells him no one in Hollywood wants to work with him either. After taking his friend Sandy (Teri Garr) to an unsuccessful audition for the part of a female hospital administrator in a soap opera, he decides to put on a dress and wig and audition for the part himself. After initially being dismissed as too feminine, "Dorothy Michaels" lands the part and soon gains immense popularity with the show's fans.

The romantic relationships in the film are very convoluted, since the same person is two completely different characters, a fact known only by his roommate. Michael falls in love with Julie (Lange), one of his costars on the show, who knows him only as Dorothy. As the two grow closer, Julie invites Dorothy to spend the holidays with her and her widowed father Les (Charles Durning), who ends up falling for Dorothy. Michael, meanwhile, is technically dating Sandy after sleeping with her to avoid telling her his secret when she catches him nearly naked in her bedroom sizing up her clothes, while Julie is going out with the show's misogynistic director, Ron Carlisle (Dabney Coleman); it is through observing this relationship as Dorothy that Michael realizes he's treated Sandy as badly as Ron treats Julie. Dorothy also attracts John Van Horn (George Gaynes), one of the soap's has-been stars, who thinks she's dating Michael's roommate Jeff. Confused yet?

The film was well-received by both critics and the public, becoming the second highest-grossing film of 1982. It was nominated for ten Academy Awards, winning Best Supporting Actress for Lange, and garnered Hoffman a BAFTA and a Golden Globe for Best Actor. It was also praised for its innovative take on gender relations, showcased through the things Michael learns about men and women by living both lives. In 2019, it was adapted into a Broadway stage musical called Tootsie and changes the main setting of a TV show into a Broadway show and updating it to present-day New York City, whilst expanding roles of several characters. It starred Santino Fontana as Michael / Dorothy, Lili Cooper as Julie, Sarah Stiles as Sandy, Andy Grotelueschen as Jeff, Reg Rogers as Ron, and Michael McGrath as Stan.

Has nothing to do with the rolls or the pops, though the Title Theme Tune does say, "Roll, Tootsie, roll!"

Tropes used in the original movie: