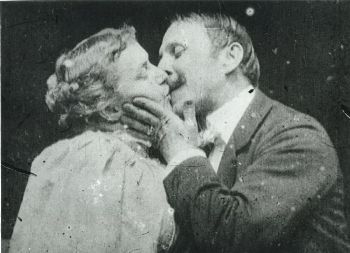 The shame of it all!
Advertisement:

The Kiss is a 1896 short film directed by William Heise.

Only 18 seconds long, this early short film stars May Irwin and John Rice, re-enacting their kissing scene from the stage play The Widow Jones. It was the first film featuring a couple sharing such an intimate moment and as a result it caused a scandal at the time.

Not to be confused with the 1929 Greta Garbo vehicle which was the last Silent Movie produced by a major studio before the Talkie era, nor with the 1988 Canadian horror flick.

"The Kiss" provides examples of...