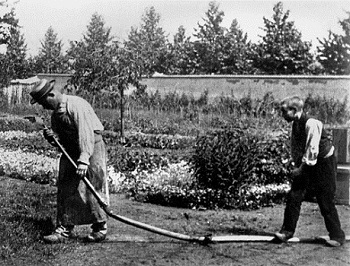 The "Lumière Brothers Films" are the short films shot in 1895 by cimematic pioneers Auguste and Louis Lumière. The Lumière brothers were photographers who owned a very profitable business manufacturing and selling photographic plates. They became aware of Thomas Edison's Kinetoscope, an early motion picture device contained in a box in which one single viewer would look through an eyepiece and watch a film. Convinced that it would be more efficient to project images for group audiences to watch together, the Lumières invented the Cinematograph, the world's first true movie projector, an all-in-one device that exposed film, developed the negative, and then projected the developed film for an audience.

The Lumières filmed their first film, a clip of workers leaving their factory in Lyon, on March 19, 1895. On December 28, 1895, the Lumières showed ten films for an audience in Paris. This made history as the first ever public screening of motion pictures. All the films are 40-50 seconds long, and run for about 7 1/2 minutes if they're shown together without a break. The ten films were:

Not shown at this exhibition was an eleventh film, which was screened for the public the next month and became the most famous of the Lumière films:

An Urban Legend holds that Arrival of a Train at La Ciotat, a 1-minute film which shows Exactly What It Says on the Tin, so startled the audience that people ducked out of the way when they saw the train coming at them. This is certainly nonsense, as moviegoers of the 1890s would have known that trains are in color, are in three dimensions, and make sound (and contrary to the popular cliché, the train wasn't coming head-on, the camera being on the platform).

But it is true that the films became sensations. The Lumières spent a decade making similar short films, but did not really believe in the new art form they were pioneering. Unbelieveably, Louis Lumière himself said that the cinema was "without any commercial future". The Lumières went back to their roots in photography, inventing the Autochrome process, an early method of color photography.

See also the cartoons of Charles-Émile Reynaud, another Frenchman, who worked in animation, and was showing films for the public three years before the Lumiere brothers.

Tropes found in the Lumière films:

From 1895, the first gag in the history of cinema.

From 1895, the first gag in the history of cinema.