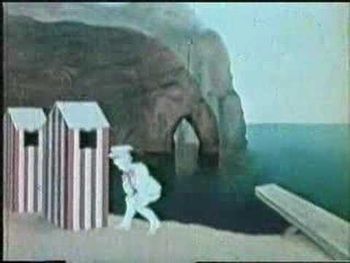 The "Reynaud films" are the work of pioneering animator Charles-Émile Reynaud.

The concept of persistence of vision, and the idea that a succession of flashing images could produce the illusion of motion, had been understood for much of the 19th century. By the 1830s the zoetrope

had been invented. The zoetrope was a crude animation device consisting of a drum with images on the inside and slits in the side, causing the appearance of motion when one spun the drum and looked through the slits. In 1878 Reynaud had improved on this by inventing the praxinoscope

, which replaced the slits with an inner wheel of mirrors, making for a better image. Reynaud later added a lantern which allowed for projection of the images onto a screen. Unfortunately both devices were limited to 12 images, allowing only short and very crude animation.

In 1888 Reynaud had made a breakthrough. He hit upon the idea of creating belts of glass-painted images, with holes in the belt that allowed for a wheel with spokes to move the belt through the projector. This invention, which resembled the later invention of motion picture projectors, allowed for Reynaud to project longer and more complex cartoons, with 500 or more images on glass plates. The cartoons ran for anywhere from 5 to 15 minutes, depending on projection speed.

Reynaud first exhibited his new cartoons for the public in 1892. These were some of the first exhibitions of motion pictures in the world, beating the Lumiere brothers and their live-action films to the punch by a full three years. Reynaud's cartoons became quite popular, but his technique of reflecting glass plates proved to be a technological dead end, soon eclipsed by the Lumiere brothers and Thomas Edison and others who were projecting motion pictures by using photographic film. Real Life had a downer ending when Reynaud, depressed over his declining career, threw almost all of his cartoons into the Seine in 1910. Only two survive and they add up to about a five-minute run time. They are:

A man peeps on a woman in the dressing room

Example of:
The Peeping Tom

A man peeps on a woman in the dressing room