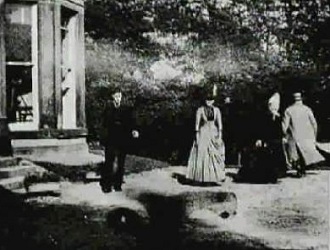 This very short clip is perhaps only noteworthy for being the oldest surviving film. French inventor Louis Le Prince shot this at the home of his parents-in-law, Joseph and Sarah Whitley, on October 14, 1888. The Whitleys appear in the film, along with Adolphe LePrince (Louis' son) and Harriet Hartley.

Can be viewed here

On a sadder note, Sarah Whitley died only 10 days after the film was made and Louis Le Prince mysteriously disappeared from a train in 1890. Le Prince's body and luggage were never found, but, over a century later, a police archive was found to contain a photograph of a drowned man who could have been him. His disappearance allowed Thomas Edison to take the credit for the invention of motion pictures, but he has been heralded as 'The Father of Cinematography', in current times.

Shot at 12 fps, playback at modern speeds of 24.64 fps gives a runtime of 2.11 seconds, almost making this work too short to include any tropes.

The tropes it does manage to have: