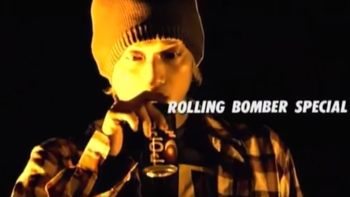 Rolling Bomber Special is a Short Film directed by Tetsuya Nakashima that tells the story of Shintaro Katori, and his quest to destroy the world...if the "heroes" of this story are to believed. See, a Sentai team calling themselves Earth Defender Freshman is onto his schemes and will stop at nothing to protect the world and everyone in it. There's only one problem with all of this...

Shintaro Katori has absolutely no idea what they're talking about.

And even worse, the Freshmen are so hilariously inept, if that's all that will stand against the forces of evil, the world is doomed anyway.

A hilarious jab at all things Super Sentai and widely believed to be a Web Original, the short actually dates back to 2001 as part of an anthology of short films done by members Shingo Katori and Tsuyoshi Kusanagi of the long running Japanese Boy Band SMAP, inventively titled SMAP Short Films. You can watch it here.