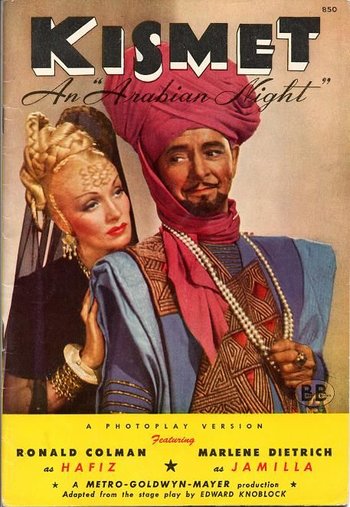 Kismet is a 1944 film directed by William Dieterle, starring Ronald Colman, Marlene Dietrich, and Edward Arnold. It is a theatrical adaptation of the stage play Kismet.

Colman plays Hafiz, a beggar who styles himself "King of the Beggars". He does well enough at begging, liberally supplemented by thievery, that he has a house and a servant to take care of his daughter Marsinah (Joy Page). At night he goes about pretending to be the "Prince of Hassir". That's how he meets and falls in love with Jamilla (Dietrich), a Macedonian in the harem of the villainous Grand Vizier (Arnold).

"Before this fool's execution, I want him to hear something. You were told of a royal wedding today. That wedding will still take place. I've combed the corners of Baghdad for this man. And while he was plotting with my enemies, I was arranging to make his daughter queen of the empire!"