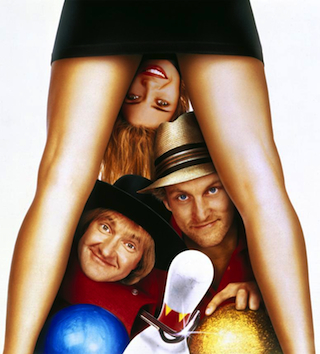 Kingpin is a 1996 Slapstick comedy made by the Farrelly Brothers.

It stars Woody Harrelson as Roy Munson, a former top bowler who lost his hand after an attempt to hustle some other bowlers went awry. In the present, Roy leads a pathetic life, forced to have sex with his repulsive landlady just to stay in his lousy apartment. When he discovers Ishmael (Randy Quaid), an Amish bowling prodigy, Roy sees his chance at getting out of the gutter. He offers to take Ishmael to the bowling championship in Reno, offering Ishmael the prize money to save his family's farm. Along the way, they pick up Claudia (Vanessa Angel), an attractive lady with her own goals.