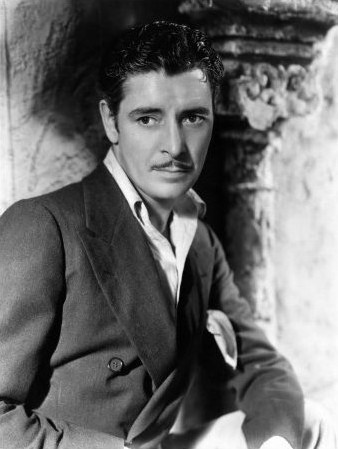 Ronald Colman (9th February 1891 — 19th May 1958) was a British actor from The Golden Age of Hollywood, and possessor of one of the most magnificent voices in film history, a rich, velvety baritone perhaps only rivaled by his contemporary, Claude Rains.

Colman was born in Surrey. His plans to study engineering were ruined when his father died of pneumonia when he was 16. He started in amateur theatricals while in his teens and in 1914 made his debut on the London stage. Unfortunately, something else made its debut in 1914: The Great War. Colman, who was a reservist, was called up for duty immediately and served in the same regiment as Claude Rains and Basil Rathbone. He suffered a shrapnel wound in October 1914, that led to his discharge from the Army in 1915. Colman returned to the stage by 1916, emigrating to America in 1920 to enjoy success in American theater.

He hit it big in 1923 when he was tabbed to star alongside Lillian Gish in Gish vehicle The White Sister. Colman abandoned the theater permanently, jumping into movies with both feet and becoming one of the most popular leading men of the silent era. While many silent stars saw their careers tank with the coming of talking pictures, Colman didn't miss a beat. Partly that was due to his velvety speaking voice and partly it was because Colman, unlike many of his contemporaries, easily adapted to the more naturalistic acting style that talking films demanded. In any case, Colman enjoyed a hit right off the bat with Bulldog Drummond, and spent the rest of his career playing charming, witty English gentlemen. He was particularly well-suited for adventure movies, playing the lead in classics of the genre like Lost Horizon and The Prisoner of Zenda. In 1947 he won an Oscar for Best Actor for A Double Life. His film work became more sporadic after that, but he had great success in radio, frequently appearing As Himself on The Jack Benny Program as Benny's perpetually irritated neighbor. Colman died of emphysema at the age of 67.