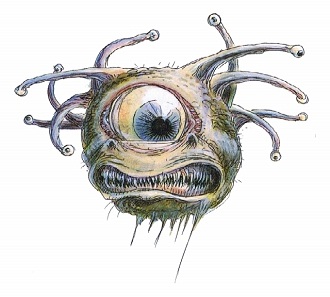 I C U.
"What's a giant eye going to do — pick you up and wink you to death?"
— Joel on The Crawling Eye
Advertisement:

From the Latin oculus meaning "eye" and thorax for "chest," this creature's body is primarily an eyeball. Common variants include one giant central eye in a body over a wide mouth, smaller eyes (which may or may not be on stalks) around the central one, or a "body" that is nothing but a disembodied eye, perhaps with a pair of demonic wings. These creatures are generally able to fly, whether with wings or by some innate levitation ability. If they have limbs, they tend toward tentacles, and their eyes often have special properties like a petrifying gaze or Eye Beams. Because of the symbolism between disembodied eyes and creepiness, creatures like this tend to be evil more often than not. At any rate it is a good way to make something appear truly alien.

A subtrope of Cephalothorax, a creature whose body is mostly head. Not to be confused with a Cyclops or Faceless Eye. Often combined with Giant Eye of Doom. See also Brain Monster, which exposes a different organ instead.

A giant floating eye that accompanies Truth and manifested from Luka's frustration about Marinette's secrecy. The amok is in Luka's guitar pick pendant, which is also his akumatized object.

A giant floating eye that accompanies Truth and manifested from Luka's frustration about Marinette's secrecy. The amok is in Luka's guitar pick pendant, which is also his akumatized object.