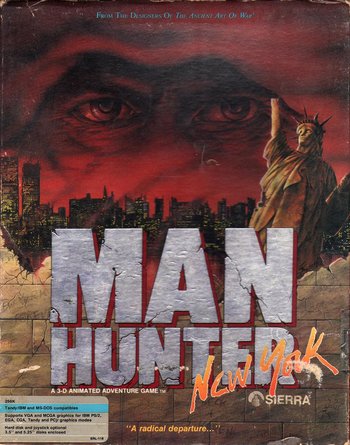 The Orbs take a bite out of the Big Apple. 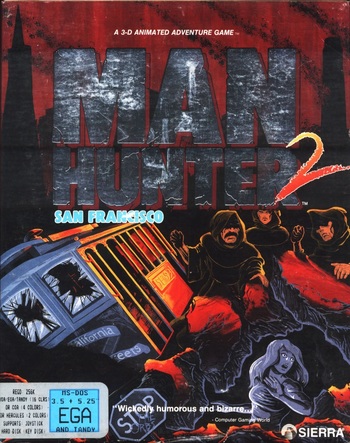 You'll leave more than your heart in San Francisco.
It's been two long, tedious years since the invasion. They came suddenly, like a thief in the night... it was all over by dawn's first light. I have no idea how the rest of the world is doing... outside communication has been suffocated.
All of us are required to wear the designated uniform, brown robes, and we must keep our faces hidden as much as possible. Above all else, we are not allowed to speak to each other. To do so would mean certain death.
Advertisement:
A select number of humans were chosen by the Orbs to become Manhunters. I have no idea how the selection was made or how I was chosen. Tomorrow is my first day on the job... and I have no clue as to my destiny.
— Excerpts from the Official Manhunter's Field Guide

Manhunter: New York and Manhunter 2: San Francisco are Adventure Games developed by Evryware (who previously made The Ancient Art of War) and published by Sierra in 1988 and 1989. Two more games were planned, one of them to take place in London, but never went into production.

You start the first game as a press-ganged Manhunter assigned to investigate some murders. This puts you on a track of escaped Serial Killer Phil, over the course of which you find out the Orbs' true intentions, and lets you eventually clean New York of aliens. The game ends with you chasing Phil in the stolen Orbs' ship.

The second game starts with you crash landing in San Francisco and accidentally killing a local Manhunter. You assume his identity and use his position and equipment to continue chasing Phil and fighting the Orbs Alliance from within.

While the games used the same AGI enginenote the second game was the last to use the engine like previous Sierra adventure games, they did not employ a text parser. And unlike earlier parser-less Sierra adventures, they lacked dialog, relying on more creative ways to give in-game information. Also, they featured then-unique first-person gameplaynote third-person in some of numerous minigames, similar to Myst, with many New York and San Francisco landmarks as a background.

Not to be confused with the 1987 film or the comic book of the same name. Or with the Manhunt series of games.