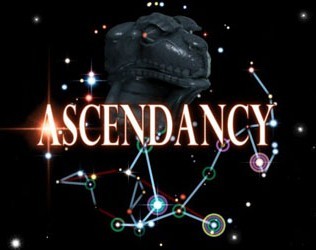 Ascendancy is a turn-based 4X (eXplore, eXpand, eXploit, eXterminate) strategy game set in space by The Logic Factory and with strong influences from Master of Orion. Players select a species among the available 21, set the galaxy's conditions (size, number of rival species controlled by CPU, atmosphere - peaceful, neutral, hostile) and begin a race to make their species the dominant one... or let it be destroyed.
Advertisement:

During the game, players must research and evolve their civilization, buiding factories, laboratories and spaceships in order to explore the galaxy and expand their empire. Every planet is divided in squares, each one providing a bonus for some kind of structure (red squares enhance industrial structures, blue ones enhance scientific ones...), but black squares don't let you build any usual structure.

Another matter players have to deal with is their relationship with the rival species, be it neutral, friendly or wary. Each species has a special ability to help them in their progress.

The variety of technologies, the Turn-Based Combat and the different species made this game quite popular in its time. However, the poor AI was also well-known, even though The Logic Factory released a patch to make the rival species a bit more intelligent.

There are several ways to win this game: by conquering other species' homeworlds, exploring 2/3 of the galaxy, being friends with all species or annihilating them. In any case, the game continues and even if you achieved one of the previous goals, you can still keep growing your empire.

released a version of the game for iPhone and iPad. Sadly, the conversion of all apps from 32-bit to 64-bit has left the game behind: it was not updated and is no longer available.