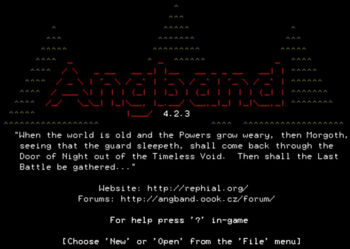 Angband is a roguelike game loosely based on J. R. R. Tolkien's books set in Middle-earth, but with stuff from other games, mostly Dungeons & Dragons and Rolemaster, as well as original content. Along with NetHack, Dungeon Crawl, ADOM, and ToME, it is considered one of the five major modern roguelikes. It has been in continuous development since 1990.
Advertisement:

The objective of the game is to defeat Morgoth, the original Big Bad of Middle-earth. To get to him, you must first descend through 100 levels of increasingly hostile dungeons, and hopefully acquire enough experience and equipment to defeat him. The challenge comes from learning how best to deal with the vast menagerie of enemies in the dungeon, and knowing when and when not to take risks.

Although not the first in its roguelike line (that distinction goes to Moria, of which Angband is a descendant), Angband is the grandfather of an entire family of roguelikes collectively known as *bands, thanks to its relatively easy-to-fork source code.

Angband and other *bands have a few features that make them distinct from other roguelike families:

The latest version of Angband can be downloaded at http://rephial.org/