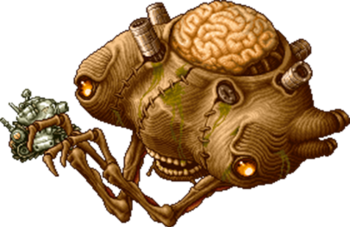 I can has Metal Slug?
Andros: Only I have the brains to rule Lylat!
Fox McCloud: So, Andros, you show your true form.
— Star Fox 64
Advertisement:

The brain. A big, juicy, wrinkled organ on our head that is protected by the skull for a good reason. Now, imagine when it's not...

There are two types of monstrous brains:

A sister-trope of Brain in a Jar, although a lot of these brains don't really need the jar life-support system, as well as the furthest extension of My Brain Is Big.

Subtrope of Evil Is Visceral and Body Horror, and thusly, is always played for Nausea Fuel. Compare with Oculothorax, where the monster is a giant eye.

The Psychic Death Tanks are tanks powered by the brains of psychic children.

The Psychic Death Tanks are tanks powered by the brains of psychic children.