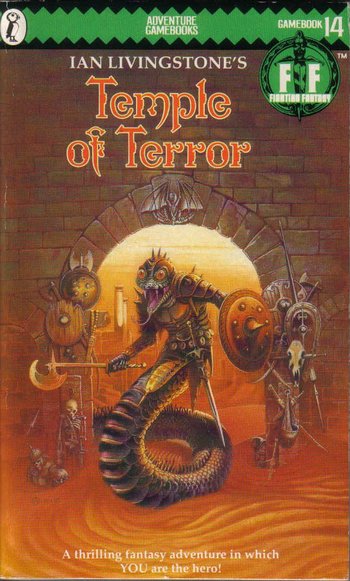 Temple of Terror is the 14th entry in the Fighting Fantasy series of game books, written by Ian Livingstone. While it can be played as a standalone adventure, the beginning heavily implies that this game is meant to be the sequel of Livingstone's previous work, The Forest of Doom.

You start the game in the Dwarven village of Stonebridge, enjoying some rest after your latest adventure when the old wizard Yaztromo himself storms the village with dreadful news: the Dark Elves of Darkwood forest are secretly gathering an army bent on world domination, and have sent their champion, the dreaded warlock Malbordus, to the Desert of Skulls: according to an ancient legend there's a long-forgotten, evil-infested temple in the middle of this scorching wasteland, hosting five Dragon statuette: with each of these artifacts it's possible to summon a Nigh-Invulnerable dragon that will do the bidding of evil. It is clear that Malbordus must be stopped before he gets his hands on the Dragons, and thus a hero is required to stop the Dark Elves. Armed with your shiny new sword and some spells taught you by Yaztromo, you have to venture forth south in order to reach the temple, get all the Dragons before Malbordus does and stop him once and for all, all of this while surviving the deadly desert, the assassins sent by Malbordus and the infernal cult of Leesha, mistress of said temple.

The gameplay is overall similar to Jackson's The Citadel of Chaos, only with Livingstone's signature Gotta Catch Them All style which narrows the true path to victory to one and, of course, next to no clue on which path is the right one.

Temple of Terror provides examples of: