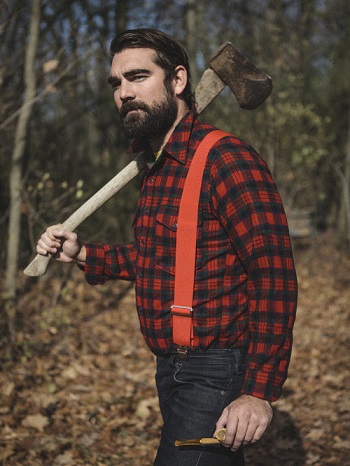 And he's okay.
"In a period of industrial development and modernization in urban areas, logging remained a traditional business in which the workers exhibited pride in their craft, their physical strength and masculinity, and guarded their individualism. Their camps were a bastion of the traditional workplace as they defied modern rationalized management, and built a culture around masculinity."
— The Other Wiki, "Lumberjack"

Lumberjacks are commonly used to represent strength, man's dominance over nature, and the idea that axes are pretty cool. In fiction they tend to be badass, often to the point of Testosterone Poisoning. Either that, or to sell paper towels.

Because people will expect a lumberjack to be manly, they are almost always men. They tend to dress like a stereotypical 19th century Paul Bunyan type with a flannel shirt, rugged outdoorsman look, some Manly Facial Hair, and large muscles developed from years of swinging an axe. The much rarer female lumberjack will either be a Butch Lesbian and Played for Laughs, or look exactly like a normal girl wielding a giant axe, with her lumberjack heritage used to Handwave her insane Super Strength.

Occasionally seen in a log-rolling contest.