Literature / The Adventures of Strong Vanya 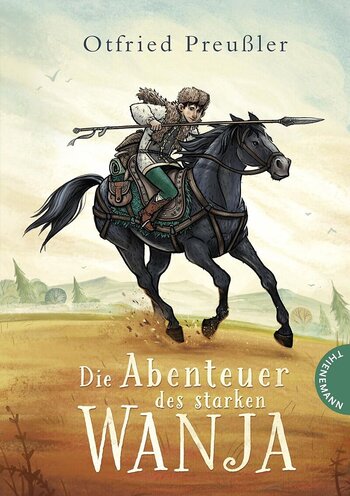 The Adventures of Strong Vanya (German: Die Abenteuer des starken Wanja) is a 1968 German Fantasy children book written by Otfried Preußler, author of Krabat, The Little Witch and The Robber Hotzenplotz. It is strongly inspired by Russian Mythology and Tales.

A long time ago, in a remote Russian village, there lived a farmer called Vasili Grigorevich, who had three children: Grischa, Sascha and Vanya. Grischa and Sascha were diligent hard workers, but Vanya was a self-confessed and proud slacker who, in spite of his flaws, was the apple of their father and their Aunt Akulina's eyes.

One day, Vanya is gathering wood in the forest when an old, blind stranger approaches him to tell him he is destined to become Tsar; but he needs to lie down on his house's large stove (Russian stoves were large structures where people often slept on) during several years to gather strength, without talking and without moving beyond what was strictly necessary. And when he is ready, he must travel through several countries and cross the White Mountains.

At first Vanya laughs the kindly man's extraordinary claims off, but he instinctively feels he should trust him. So, he goes back home, and refusing to give any explanation to his family, he gathers several blankets and sacks of sunflower seeds and lies down on top of the stove. For the next seven years, Vanya will rest, build up his strength, and fight every attempt to force him to get down from the stove (including his brothers' threats of burning their home down).

When he is finally ready, Vanya says goodbye to his family and sets off on a long journey towards the White Mountains. On his path he will happen upon adventures, monsters and an evil conspiracy to seize the rightful Tsar's crown.

The Tropes of Strong Vanya: