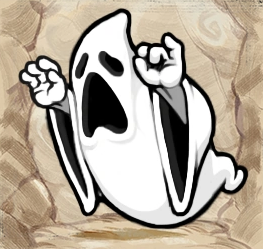 Ghosts (and some other forms of supernatural creature) are often depicted with their eyes or mouth as deep black hollows, often accompanied by the mouth gaping wide, either slack or screaming. Eyes so depicted might be missing pupils, sclera or even eyelids, while mouths may lack teeth or lips. In extreme cases the shapes of the mouth or eyes may be unnaturally rounded or distended.

In some cases the presence may imply a loss (or lack) of humanity, and be reversed should that humanity be regained (or gained in the first place).

One way or another, the effect can be unsettling; perhaps it's the lack of the emotional cues that those features provide, or the aforementioned loss of humanity, or simply a descent into the Uncanny Valley.

The Stringy-Haired Ghost Girl may have eyes like this, and they're commonly (and often the only) facial features of the Bedsheet Ghost. Compare Glowing Eyelights of Undeath, with which this may be paired to create eyes like gaping pits surrounding pinpricks of light.

A subtrope of Nightmare Face. Overlaps with Black Eyes of Evil; see also Looks Like Cesare and Hidden Eyes. Compare/Contrast Excessive Evil Eyeshadow, and compare Scary Flash Light Face, which can produce an appearance much like this.