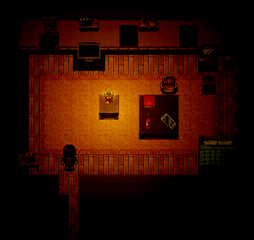 "i hereby dub this the weirdest horror RPG game in the entire universe..."
— A random YouTuber's comment on Manly Badass Hero's playthrough of this game.

You play as a boy named Kazuki that is going through strain in a relationship with his girlfriend, Akari. It takes place in a strange room where you have to accomplish certain things in order to complete all the endings. There are over 30 endings to accomplish (with seven more endings, 5 bad, 1 good, and one "Truth" end, but should you beat one of these you're pretty much done for the first part), meaning you'll have to play it over and over again to beat them all...with the title screen and room changing with almost every time you return.

There is an English version