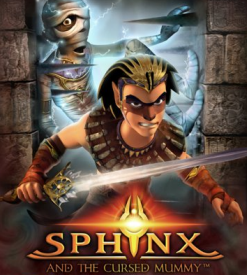 Sphinx and the Cursed Mummy is a 2004 multi-platform Zelda clone made by Eurocom that takes extreme liberties with both Egyptian history and mythology, rife with anachronisms, Fridge Logic, and random fantasy elements despite being ostensibly based on Egyptian history. Considered a "hidden treasure" of the sixth console generation, it's well worth a look.

The plot concerns Sphinx, a demigod in a kind of Alternate History ancient Egypt where there are Funny Animals. He's out training with his rival Horus one day when he stumbles into a plot by the evil god Set to use the mystical Castle of Uruk to do the bad-guy thing and Take Over the World. Meanwhile, Prince Tutankhamen—yep, that one—is preparing for his birthday celebration and his betrothal to his girlfriend. He gets stuffed in a sarcophagus, Strapped to an Operating Table by his older brother, and turned into a mummy. He's Only Mostly Dead, though, and Sphinx stumbles into him and helps revive him with a canopic vase. The two then work together to help put a stop to Set's schemes to rule Egypt.

The game takes place in two parts. The majority of the game takes place as Sphinx, who does the running, jumping, and baddie-battling common to action adventure heroes. The Mummy, on the other hand, has his own separate sections that focus almost exclusively on puzzle-solving. These act as chapter breaks in Sphinx's story, and usually come after dungeons, major bosses, or other big quests.

In late 2016, THQ Nordic purchased the rights to the game, having expressed an eagerness in how well it matches the likely audience for the Nintendo Switch. In November 2017, it released on Steam, and sure enough, a Switch version was released in January 2019.