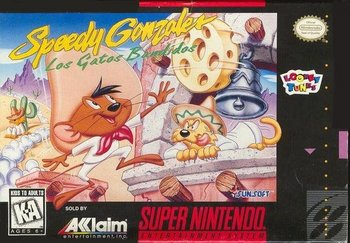 Speedy Gonzales: Los Gatos Bandidos is a 1995 licenced Looney Tunes Platform Game for the Super Nintendo. Starring the fastest mouse in all of Mexico, Speedy Gonzales.

In a small Mexican village the mice are all holding a fiesta, until the party is spoiled by the nefarious cat gang Los Gatos Bandidos, who capture them. Slowpoke Rodriguez escapes and calls for the help of his cousin Speedy. Speedy, being the friendly hero guy he is, sets off on a rescue mission across the country to free the captured mice and put a stop to Los Gatos Bandidos.

The game is a simple 2D platformer. You naturally play as Speedy Gonzales as he fights enemies and other hazards in the quest to rescue the mice. Speedy also has access to a short ranged kick to defend himself. Within each level there are certain amount of mice to rescue, which is as easy as finding their cage and freeing them.

This adventure contains examples of: