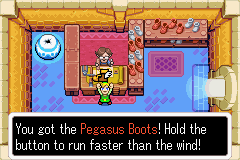 An item, ability, or spell that enables the player character to move faster, possibly to the point of Super Speed. It can be anything from a device or magical accessory that allows the player to run fast to an animal that can be ridden around. This can be one of the most useful items in the game especially if the character normally runs at the pace of an arthritic slug, and certainly no players are going to complain at being given the ability to complete tasks in a quicker fashion. Occasionally, it may be key to beating a Timed Mission that would otherwise be impossible. There may be a drawback in the form of the character now being Too Fast to Stop, which can be amplified if there are hazards to watch out for, like Spikes or Bottomless Pits.

This is generally the item's explicit purpose, but other times it may be an unintended side effect of something else. Players will invariably exploit this while conducting a Speed Run.

Compare Run, Don't Walk and Nitro Boost (for speed boost in vehicles). Also see Fast-Forward Mechanic for when you move faster through time.

If you shoot a cardboard with the image of a pair of shoes on it, you will gain a temporal boost of speed.

If you shoot a cardboard with the image of a pair of shoes on it, you will gain a temporal boost of speed.